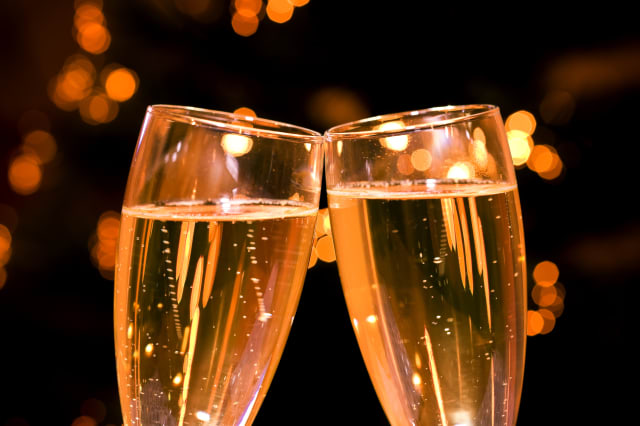 With prosecco sales in particular at an all-time high, we're getting through more bubbly than ever.

But if you're drinking from a tall, slim flute, you may not be getting the best from your champagne or sparkling wine, as the shape of your glass can have a dramatic effect on the flavour.

SEE ALSO: You can now buy Moët from a vending machine

"You see, using a flute is like going to a concert with ear plugs because it will not let you enjoy what is inside, because a good champagne before anything is a good wine," she tells The Drinks Business.

"Flutes are for bad champagne, sorbet or gazpacho, but not to drink champagne."

The problem with a flute is the lack of air space in the glass, which makes it harder for the flavour and aroma to get through. While a flute is great for making the most of the fizz - bubbles are produced more quickly - it doesn't do justice to a really good wine, which needs more room for the flavours to develop.

So what sort of glass should you be using?

The most widely-used alternative to the flute is the saucer, or coupe - the saucer-shaped glass reportedly modelled on Marie Antoinette's left breast.

Many of us have a set in the back of a cupboard, as they were hugely popular in the early 20th century.

However, this is partly because the most popular champagnes then were rather sweeter than the sparkling wines we enjoy today. Bubbles disperse more quickly in a coupe, making the wine taste softer and fruitier.

This means that if you want to get some use out of your coupes they'll be at their best with sweet sparkling wines such as an Asti Spumante.

There's a third type of champagne glass, though, that's probably less familiar: the tulip glass. They're shaped a bit more like a standard wine glass, with a wider bowl than a flute, narrowing towards the top.

These glasses allow the bubbles to develop in the same way as a flute, while trapping the flavours and aromas. The trick is to fill the glass only to its widest point, to make the most of this.

A tulip glass, say the experts, is the best way to drink a really good sparkling wine or champagne.

let's face it, most of us would be happy to drink our bubbly from a bucket - or a shoe, in what was seen as the height of decadence a hundred years ago.

And if you don't have any champagne glasses at all, you really don't have to worry. Indeed, many experts, including the team at glassware manufacturer Smedson, say a standard red wine glass can be the best option for the very best wines.

"If you're lucky enough to experience a super-premium champagne, consider drinking it from a good quality red or white wine glass. These great wines will be extremely complex with delicate qualities that need to be preserved and allowed room to breathe," they tell the Glass of Bubbly website.

"A large bowl like that found in a Burgundy glass will give your champagne or sparkling wine more depth and accentuate the aroma, maximising its intricacies like a symphony played through the finest speaker system."

So you can plonk down those standard wine glasses and hold your head high.

"Nice taste but not enough fizz."
"It's harsh at the back of the throat."
"This one's rather flat for me."

The Sainsbury's Taste the Difference might have been one of the priciest bottles of supermarket champagne but the tasters picked up on how quickly it went flat and scored it the same as the other bottle from Sainsbury's at 2/5.

"Oohh it's like drinking the stars."
"It has a lovely crisp, dryness."
"Well balanced, I could drink more of this."

This champagne had the tasters waxing lyrical and even going on to jokingly quote the forefather of chamagne, Dom Pérignon - "Come quickly, I am drinking the stars!" was falsely attributed to the monk in the late 19th century. They even tried to come back for more after scoring it a near-perfect 4.5/5.

"This is tart without being harsh."
"What a deicate flavour."
"This is the most distinctive and bold."

The Asda extra special might have been the cheapest bottle on trial but it packed the biggest flavour punch, scoring highly with the testers on aroma and depth putting it in second place with an average mark of 4/5.

"This tastes of luxury."
"It's very rich."
"Very smooth and slightly creamy."

Co-op's second offering was well received with all of the tasters praising its rich flavour notes and texture. Co-op's cheaper bottle scored highly enough to secure third place with an average mark of 3.5/5.

"Easy to drink and the most citrusy of the bunch."
"It's the most acidic."
"A bit too gassy - burping isn't great for a dinner party!"

"Pungent smelling and a bit harsh."
"Fruity with very little acidity and quite well balanced."
"It's overpowering, I couldn't drink a lot of it."

Before the labels were hidden the tasters were the most excited to get stuck into this bottle from Marks and Spencer. Despite being the most expensive bottle in the trial, it only scored an average of 2.5/5 putting it in third place.

"It's not crisp at all, or fizzy enough."
"It's light, almost too light in fact."
"It tastes like cava to me."

This offering from Sainsbury's fell flat with our tasters, literally. All the testers commented on the lack of fizz and depth leaving the Blanc de Noirs with an average score of 2/5 and in jint bottom place.