China's Terracotta Warriors are coming to the UK in 2018 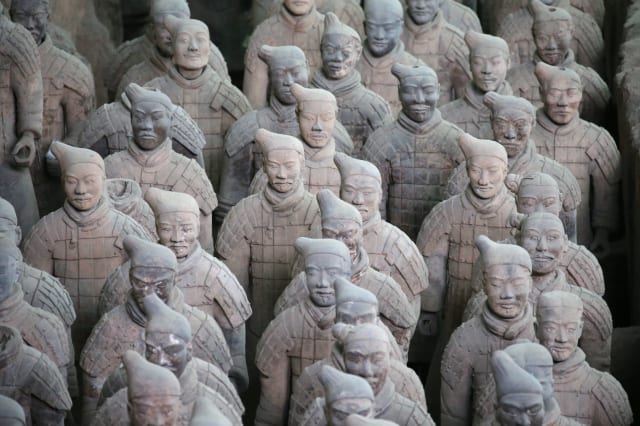 2018 is set to be a big year for Liverpool as the world-famous Terracotta Warriors arrive at the city's World Museum in February – their new home until October.

SEE ALSO: This is the number one place to visit in the UK in 2018

SEE ALSO: The best museums in the UK

It will be the first time in more than ten years that the terracotta sculptures from the tomb of China's First Emperor will be brought to the UK and eager visitors to the exhibition can purchase tickets from Thursday 9 November 2017.

Opening on 9 February until 28 October 2018, China's First Emperor and the Terracotta Warriors will feature over 180 fascinating artefacts from museums across Shaanxi Province, more than half of which have never been on show in the UK before.

The must-see exhibition tells the story of the formative years of the Chinese nation, from the pre-unification Qin Kings, to China's First Emperor, Qin Shi Huang's rise to power and the legacy of his achievements in the succeeding Han Dynasty.

Visitors will come face to face with the extraordinary Terracotta Warriors, including a life-size terracotta horse, as well as other exquisite objects from the Emperor's vast burial complex. Objects from the Han Dynasty will explore ancient Chinese lifestyle, the economic prosperity of the empire and beautifully crafted artefacts from royal burials. 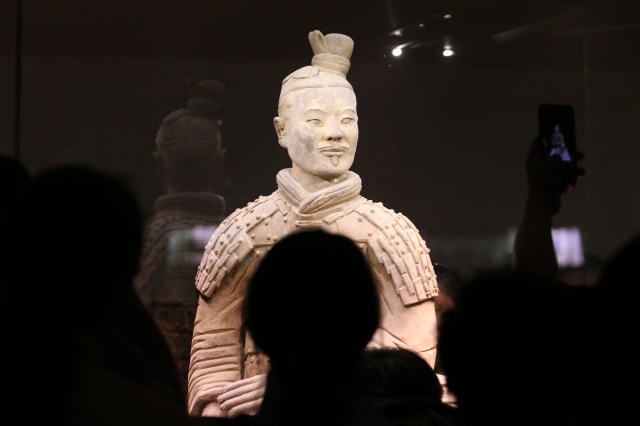 The unmissable exhibition spans almost 1,000 years and sheds light on the formative years of the Chinese nation, from the bitter struggles of warring states in the 8th century BC to the rise of the Qin State and the unification of China by the First Emperor in 221 BC, concluding with the peace and prosperity of the Han Dynasty (206 BC to 220 AD).

Karen Bradley, Secretary of State for Culture, Media and Sport, said: "The Terracotta Warriors are one of the wonders of ancient China and a phenomenal sight to behold. Bringing a selection of the Warriors to Liverpool is a fantastic achievement that will benefit the whole country.

"This incredible exhibition will undoubtedly boost tourism to the city and attract visitors from across the UK and Europe to see China's greatest national treasure."

Tickets are priced from £14.50 for adults and £5.50 for children aged between 6 and 17 years. Children aged 5 years and under go free. Visit liverpoolmuseums.org.uk/terracottawarriors for more information on pricing and how to book tickets for the Terracotta Warriors.

Discover more amazing things to do in Britain in 2018...

A whole host of goings-on will put Britain firmly on the holiday map for 2018. Whether you're a culture vulture or thrill-seeker, the UK is set to see an amazing array of new openings, great days out and fantastic events in 2018.

SEE ALSO: The number one place to visit in the UK in 2018

From the arrival of China's Terracotta Warriors to a new surfing wave in Bristol, these are some of the best things to do in Britain throughout 2018...

China's Terracotta Warriors are coming to the UK in 2018 and will arrive at Liverpool's World Museum in February – their new home until October. It will be the first time in more than ten years that the terracotta sculptures from the tomb of China's First Emperor will be brought to Britain. China's First Emperor and the Terracotta Warriors will feature over 180 fascinating artefacts from museums across Shaanxi Province, more than half of which have never been on show in the UK before. Visitors will come face to face with the extraordinary Terracotta Warriors, including a life-size terracotta horse, as well as other exquisite objects from the Emperor's vast burial complex.
Blackpool Pleasure Beach's £16.25 million roller coaster ICON is set to open to thrill-seekers in spring 2018. At two minutes and 30 seconds, the 1.14km coaster will be the UK’s first-ever double-launch ride, meaning it gets two powerful acceleration boosts during the ride. ICON will feature an inclined loop, more interactions than any other rollercoaster in the world (15, including two tunnels, four other rides and the iconic Big One), and expose riders to the same g-force as a Formula 1 driver.

Set to be one of the biggest events in England in 2018, the Great Exhibition of the North is a summer of amazing exhibits, inspired technology, vibrant street performance, cutting edge culture and magical experiences in NewcastleGateshead. From 22 June to 9 September, you can explore the cityscape of NewcastleGateshead and discover the dynamic story of the North of England. Highlights will include the return of Stephenson’s Rocket to its birthplace of Newcastle upon Tyne at the Discovery Museum and a landmark display at Great North Museum celebrating iconic objects such as the space suit worn by Britain’s first astronaut, Sheffield-born Helen Sharman.

Bristol's new inland surfing lake will be powered by the latest wave-making technology, bringing a fantastically fun day out to active visitors. Wave Bristol will be situated in beautiful sensory, healing and kitchen gardens, and will offer a swimming pool, café, education centre, accommodation and surf shop when it opens in summer 2018. There will be three surf zones for different abilities and a high-performance surf centre for elite athletes and aspiring pros. The project also wants to educate and inspire people on a range of topics, from marine conservation to living healthier lifestyles.
Scheduled to open in late summer 2018, The V&A Museum of Design Dundee will be the only V&A museum anywhere in the world outside London. It will be the first-ever dedicated design museum in Scotland: an international centre for design, a place of inspiration, discovery and learning. Visitors to captivating site can experience the remarkable story of design past, present and future in a Scottish and global context, as well as the processes which underpin great design and the beautiful and inventive objects which tell that story. The museum is part of over £1 billion of investment in to the new Dundee Waterfront.
The capital’s largest arts festival, Lumiere London, returns in 2018 and promises to be bigger and brighter, expanding to both sides of the River Thames. The event will take place from 18 to 21 January and will include more than 40 installations from British and international artists lighting up London’s streets, buildings and public spaces. Westminster Abbey, the National Theatre, Chinatown and King's Cross are some of the locations that will be transformed by light.
High above the floor of Westminster Abbey, in a gallery hidden from view for 700 years, a new museum and gallery is being built and will open in June 2018. The triforium was originally built by Henry III around 1250-60 and offers spectacular views into the church and out towards the Palace of Westminster and Parliament Square. The Queen’s Diamond Jubilee Galleries will display treasures such as the Liber Regalis, a 14th-century illuminated manuscript setting out the order for Coronations, and the Westminster Retable, England’s oldest altarpiece. The Galleries will provide an entirely new perspective on the Abbey’s interior from 70 feet up.
Opening in spring along the seafront at Chapel St Leonards, Lincolnshire's state-of-the-art North Sea Observatory will be the UK’s first purpose-built marine observatory. The iconic glass-fronted building, with panoramic views of the coast from indoor and outdoor observation decks, will offer nature lovers a new way to experience the Lincolnshire coast. Forming an impressive gateway to the Lincolnshire Coastal Country Park, the centre will help boost understanding and appreciation of the North Sea and the marine environment, as well as provide a spectacular visitor attraction to complement the natural coastline and wildlife.

A new 12-mile easy-going mountain bike route will open in spring 2018 called the Swale Trail, which will be suited to families and novice off-road cyclists. The route will follow the scenic valley bottom between Reeth and Keld and really opens up the Yorkshire Dales to family cycling without having to tackle the more challenging hills on existing routes. Around 75 per cent of the route will be traffic-free, making use of existing rights of way. Once open, it will be designed in three sections so that people can join the trail at various points along the way and make use of the pubs, cafes and accommodation.