Heavy rain and 60mph gales to batter Britain this weekend 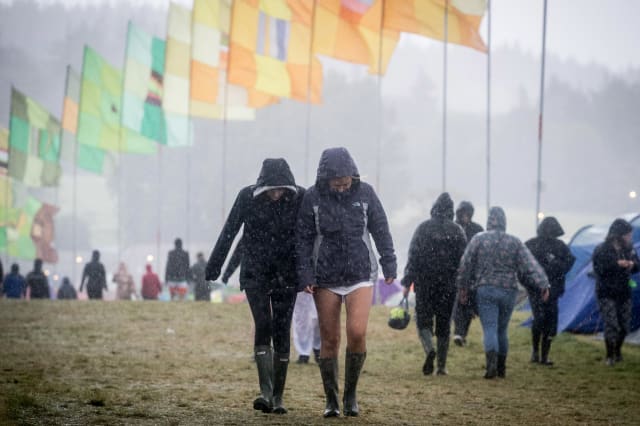 Britain is set to be battered by torrential rain and strong gales this weekend as music fans brave the bad weather at Lulworth Estate for Dorset's Bestival.

Forecasters say some areas in the south of Britain could receive up to 1.6 inches, the Daily Mail reports.

For Saturday, the Met Office predicts "a day of sunshine and heavy showers, these blustery in the west and south with brisk winds, but slower moving in the east."

It adds that the showers may merge at times, with the risk of hail and thunder. On Saturday night, the showers will fade before rain returns to the northwest by dawn. 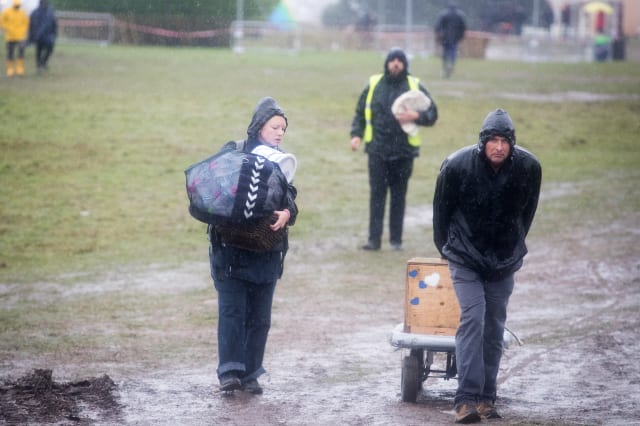 Sunday will see a bright start in the east, before rain spreads across the country, with the heaviest in the northwest. Heavy showers will follow and winds will strengthen with gales in the west.

Met Office forecasters say next week will bring strong winds and heavy showers with hail and thunder on Monday, sunny spells and fewer showers on Tuesday, but blustery showers on Wednesday.

Oli Claydon at the Met Office told the Daily Express: "The weekend will become wet and windy as a couple of low pressure systems move across the country.

"Winds will pick up on Saturday morning and on Sunday the whole of the country will turn windy with gusts of more than 50 knots (57mph) possible across Wales and the southwest.

"It is a generally wet and windy picture into the start of next week."

Meanwhile, autumn is expected to be hotter than summer, with highs of 32C, according to experts.

Speaking to the Daily Star, The Weather Outlook forecaster Brian Gaze said: "It would be a freak occurrence - but September could well have a hotter UK average temperature than August this year, with forecast models showing much warmer than average temperatures for the UK for September."

This freak weather phenomenon has only occurred once in the last 60 years, according to Met Office records.

The Met Office says: "For September and September-November, above-average temperatures are more probable than below-average."

11 PHOTOS
Psst... These are the alternative holiday destinations to visit this summer
See Gallery

Psst... These are the alternative holiday destinations to visit this summer

It's time to soak up the sunshine on a summer holiday and this year, we're looking beyond the beaches of Ibiza and the tavernas of Crete. With the help of travel site momondo.co.uk we've rounded up the best destinations for an alternative holiday in July, August or September.

Whether you're looking to get cultural in overlooked capital city or discover waterfalls, mountains and tiny towns away from the seaside crowds, you'll love these unconventional summer holiday locations...

About 3km north of mainland Noord-Holland, Texel is the largest of the Dutch Wadden Sea Islands and a dune-smothered wonderland. White-sand beaches engulf a heart of wilderness reserves and forests, with the occasional village thrown in. With horse-riding, kite surfing and salt marsh hiking galore, it’s a fitness lover’s paradise, and there’s plenty to entertain the family. Head to Ecomare, where you can watch seals and porpoises being fed, then snap a picture with the vivid red lighthouse at the island’s far north.

Surrounded by mountains and nestled deep in an emerald valley, Medellin has long shaken off its Pablo Escobar days, growing into a vibrant, cosmopolitan jewel of a city. Brand new infrastructure, including a metro system, hillside gondolas, parks and museums speak to its rich cultural heart. Nicknamed the 'City of Everlasting Spring', it offers perfect weather year-round. El Poblado’s Parque Lleras, a park with a perimeter of bars and restaurants, is where you want to be in the evenings. Visit in August to check out the famed Feria de las Flores, the Flower Festival.
Duck across the Morbihan Gulf to an island paradise measuring just a few kilometres in all directions – and home to just a few hundred people. Tranquil, low-key and picturesque, Brittany's Ile-aux-Moines is perfect for a lazy day or two away from it all. Tiny white traditional houses and vanishingly small bars and boutiques line the narrow alleyways of the built-up area around the port. As you head further south, the cobblestones give way to fig tree-lined bicycle paths, and you can catch some rays at the Grande Plage and at the beach near Goret. The entire island is free of cars, so breathe deeply and enjoy that clean air.
Forming the arch of Italy’s boot, Basilicata is draped with forests and mountains and kissed by the warm Tyrrhenian and Ionian seas. Its blissfully quiet countryside is studded with tiny villages and the remnants of volcanic activity. Lake Grande and Piccolo sparkle at the base of the extinct Mount Vulture, while the Sassi di Matera, ancient dwellings thought to be the oldest in Italy, are a sight to behold. Explore Ancient Greek and Roman ruins in the towns of Armento and Venosa, and visit a museum in a castle in Melfi on a trip to this alternative Italian region.

Kotor is a UNESCO-listed medieval masterpiece with an abundant heritage. Ringed by massive stone walls and looming mountains, the red-capped city of Kotor feels protected against the march of time. About an hour south of Dubrovnik, it offers churches dating back to the 12th century and narrow streets. Grab a stuffed burek to snack on while you explore, take your time over a coffee al-fresco, or book a cruise around the picturesque bay.

With its laid-back Mediterranean vibe, Lugano is an Italian-speaking city offering a holiday-friendly mix of boutique shopping, boat cruising and funicular riding. It’s a relaxed spot for a weekend away, brimming with cafés, bars and promenades. The old town hugs Lake Lugano, magnificent against its mountainous backdrop. Indulge your passion for cocoa at the Museo del Cioccolato Alprose, grab a coffee at the Grand Café al Porto, stroll City Park with its centrepiece Villa Ciani and check out the town’s quirky Mario Botta-designed Cherry Building.

What better place for a summer holiday than a jaunt to the self-proclaimed City of Sunshine? Nestled on the banks of the Tisza, Szeged is a laid-back university town lined with al-fresco cafés and featuring surprise palaces and cathedrals. Stroll the Stefania promenade for exquisite river views, and nod along to the strains of the musical fountain at Dugonics Square. In the evening, Dóm tér, the city’s main square, transforms into a massive open-air stage with shows playing every night throughout the summer.

Presiding over massive lake Müritz in northern Germany, Waren is an out-of-the-way spot a few hours from Berlin. A ghost town just a few years ago, it’s suddenly bursting with activity: a new marina and a profusion of new hotels and restaurants mean you’ll have plenty to keep yourself entertained, while the area’s natural beauty has been left well enough alone. Explore the nearby national park bursting with eagles and ospreys, or saunter through the cobblestone streets of the red-roofed old town – be sure to stop off for some fish-stuffed bread rolls and Italian-style ice-cream.

Matarraña blooms with olive trees, vineyards and pine forests. It’s just three hours away from Barcelona but feels a world away. Ancient, tiny towns perch like mountain goats on the hillsides, ibex roam about, and cave paintings and prehistoric settlements lurk waiting to be surveyed. Explore Puertos de Beceite Natural Park, cycle the abandoned La Via Verde and cool off at the El Salt waterfall in La Portedella. Refuel by nibbling on cured ham, goat’s cheese and walnuts – and toss back some local wine.
Often overlooked in favour of Paris and Berlin, Croatia's capital city offers quaint, historic charm alongside new bars, restaurants and boutique clothing stores. Stroll Maksimir Park, drink in the soaring spires of the Cathedral of the Assumption of the Blessed Virgin Mary and snack on farm-fresh food at the Dolac Market. Kids will love a visit to the Museum of Illusion and you can escape the heat to explore the city’s literal underworld with a stroll through the Grič Tunnel.
Up Next

Gynecologist reveals everything you need to know about your first appointment