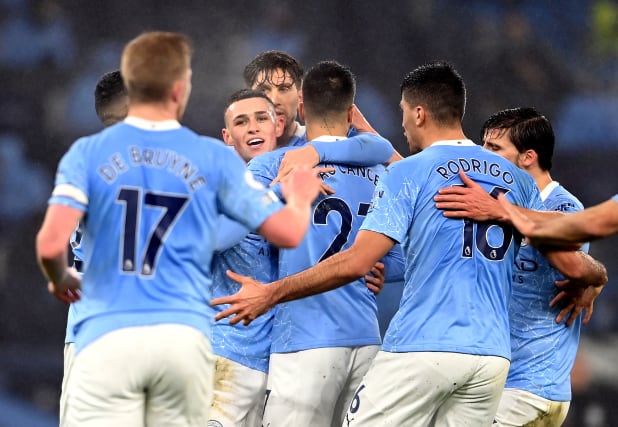 Footballers who continue to breach coronavirus protocols by hugging and kissing to celebrate goals are “brainless”, according to the chair of the key parliamentary sports committee.

Manchester City and Fulham players crowded together after scoring in their respective matches on Wednesday night, in spite of reminders from the Premier League to strictly observe protocols on the avoidance of unnecessary contact amid a worsening of the pandemic.

City boss Pep Guardiola defended his players, saying: “Sometimes the brain is a sub-conscious one and you are just there in the moment, you are not thinking.”

Julian Knight, the chair of the Digital, Culture, Media and Sport committee, told the PA news agency: “Some of the scenes we have seen have been brainless and give out an awful message.”

Captains and managers will be attending a series of virtual meetings over the next two days to talk through the changes to the Covid-19 protocols, but it is understood these are not in reaction to the breaches witnessed over the last two nights of Premier League action.

Clubs are expected to investigate protocol breaches themselves, with the Premier League able to come over the top if it feels not enough has been done.

Premier League chief executive Richard Masters has written to the clubs outlining the changes to the protocols and the need to continue to double down on following the existing ones.

The Football Association and the English Football League has also reminded clubs involved in its competitions about the protocols after some notable breaches in recent weeks.

EFL chief executive Trevor Birch warned its clubs they were “under the microscope” as never before on Monday, after professional sport was given Government go-ahead to continue despite many other areas of life being placed under heavy restrictions in a new national lockdown.

Hospitals are struggling to cope with the demands caused by an increase in Covid-19 infections and death rates are worryingly high and predicted to get worse before they get better.

Knight said a decision on whether elite sport could continue was “a matter for governing bodies and the health experts”.

He cast doubt though on whether the existing plan for this summer’s delayed Euro 2020 could be executed.

He added: “I am beginning to wonder whether the likes of the summer’s rescheduled Euro tournament will be open to go ahead as planned across 12 countries.”

The semi-finals and final are due to be played at Wembley, with matches also set to take place in Amsterdam, Baku, Bilbao, Bucharest, Budapest, Copenhagen, Dublin, Glasgow, Munich, Rome and St Petersburg.

It was reported last year that competition organisers UEFA were considering the possibility of reverting to a single-host format, with 2018 World Cup hosts Russia in the frame.