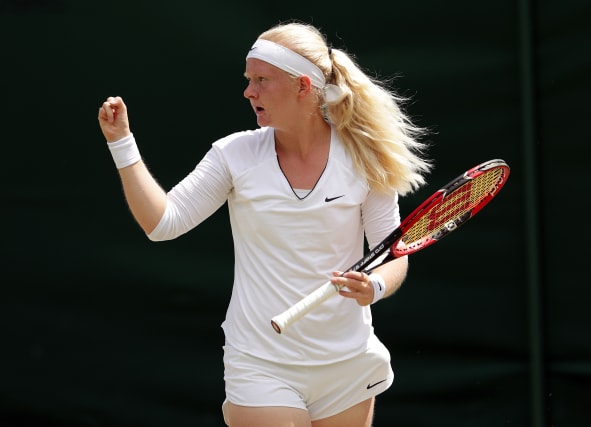 Great Britain’s Francesca Jones overcame a finger injury and a “wee mental breakdown” to reach the main draw of a grand slam for the first time.

The 20-year-old from Bradford booked her place at the Australian Open with a 6-0 6-1 victory over Lu Jia-jing in the final round of qualifying.

Jones’ dominant display came days after she feared an injury would damage her performance levels.

She said: “Before the first few days before my match, I was speaking to my coach and I was saying that my fingers had actually split from the cold in the UK and I couldn’t hold the racket too well on my forehand side.

“The forehand is my best shot so I had a wee mental breakdown before the match to be honest. It was a few days before the match and my fingers were still cut and I wasn’t sure how I’d be able to take advantage of my weapon.

“I think I was probably well prepared in terms of physically and mentally because I had a lot of time during pre-season and we worked really hard.

“I tried to trust the work that we did but I am quite a perfectionist so I do worry about the days that I didn’t hit the forehand exactly the way that I should have done or I wasn’t serving well.”

The British number five was born with a congenital condition that means she only has three fingers and a thumb on each hand, three toes on one foot and four toes on the other, but she does not feel that has held her back at all.

“I wouldn’t say I’ve ever reached a low point due to my syndrome. I stand by what I’ve said previously which is I try and use it as a positive and I see it as an advantage in many ways,” Jones said.

“I’ve definitely had to work a lot more on my physicality.

“Personally my challenge has been to put myself in a physical shape that prevents injuries. My feet work in a different way and that means I run differently, my balance goes through my feet and my toes in a different way.

“For sure, I’ve always had a small grip and a really light racket and I am hesitant to change that because it’s worked well so far. I guess in the gym I’ve spent a lot of time trying to gain strength to support my muscles that can maybe support the weaknesses that I may have.”

She went into the game ranked 241 in the women’s singles, with Lu ranked 41 places ahead of her and with significantly more experience.

Jones was the only one of Britain’s five entrants to make it past the opening round of the qualifying events, which are being played in Dubai and Doha to limit the number of players travelling to Australia.