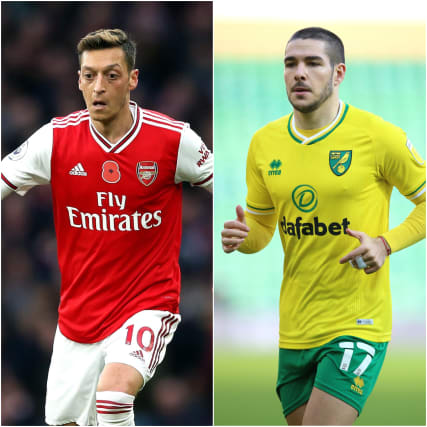 Arsenal have calmed their interest in signing Norwich midfielder EmiBuendia, after the Canaries put a price tag of £40million on the Argentinian, according to the Daily Express.

Sticking with events at the Emirates, and MesutOzil will be looking to force a move to Fenerbahce during the January transfer window, reports the Daily Mirror. Ozil has been frozen out of Mikel Arteta’s squad but appeared determined to see out his deal until the summer, while DC United were keen on landing the Germany midfielder.

At the other end of the pitch, and the Gunners will look to let AlexRunarsson leave on loan if they can sign a new goalkeeper in January, with Brentford’s DavidRaya among those on the shortlist, writes the Sun.

TiemoueBakayoko, who has spent the last three seasons out on loan from Chelsea, looks set to make a permanent move away from Stamford Bridge, reports the Daily Star. Napoli, where the 26-year-old midfielder is currently playing, look to be in pole position to sign the Frenchman.

Manchester United defender TimothyFosu-Mensah is wanted by Bayer Leverkusen, who will have to fight off interest from Ajax to land the Holland international, according to the Daily Mirror.

Eder Militao: The 22-year-old Real Madrid defender, who has caught the eyes of Roma, AC Milan and Inter, could be heading to Tottenham on a loan deal with the option of a permanent switch, says Corriere dello Sport.

Steven N’Zonzi: The France midfielder, 32, could have his loan at Rennes cut short, with Arsenal and Everton said to be interested in the Roma player, reports Foot Mercato.

Moises Caicedo: The former Manchester United target is favourite to join Brighton, who have beaten Newcastle to land the teenage Independiente del Valle midfielder, according to Talksport.