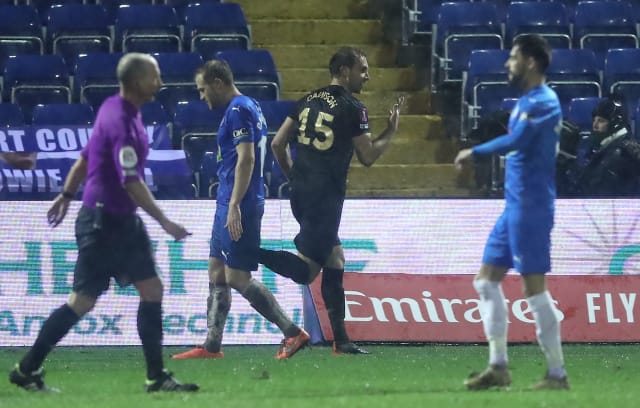 Craig Dawson hopes West Ham are just at the beginning of their FA Cup journey after they defied treacherous conditions and a hard-working Stockport outfit to progress to the fourth round.

Rain steadily fell throughout the fixture but grew heavier after half-time to contribute to a boggy Edgeley Park surface that narrowed the gulf in quality between the Hammers and their non-league hosts.

Eighty-six places currently separate the teams in the football pyramid but Vanarama National League side Stockport were able to repel their top-flight opposition for most of the match, where clear-cut chances were at a premium.

However, Dawson secured a 1-0 win seven minutes from time as West Ham set up a meeting with League One Doncaster, with the winners of that tie to take on either Manchester United or Liverpool in the fifth round.

“We’ll take each game as it comes and hopefully keep the run going,” Dawson said.

Stockport’s brave resistance was ended when Dawson rose highest to head home after substitute Jarrod Bowen swung in a cross following a short corner in a move the match-winner says came straight from the training ground.

“It’s something we work on in training so it’s good that it’s come off,” Dawson added in quotes on West Ham’s official website. “The lads put in a great shift and it’s great to keep another clean sheet.

“Stockport are a great side who are doing well in their league. It was a tough match for us, and as we saw with the other ties this weekend it’s not easy coming to grounds like this so it was a great performance from the lads.

“The conditions were tough and it’s been a while since I played on a pitch like that. But we stuck to our task and got a great win in the end.”

Stockport had beaten National League rivals Chesterfield and Yeovil, either side of edging out League One Rochdale, to reach this stage of the competition for the first time in 14 years.

Manager Jim Gannon believes his side – who are eyeing a return to the Football League – are becoming a cohesive unit ahead of a busy run of fixtures from now until the end of the season.

“We’ve got some really good individuals but we’re starting to look like a team, so I was pleased in that sense,” he said.

“This kind of moment, and looking back to the Rochdale game as well, we can take great credit in showing that we can compete.

“The National League is a really tough league to get out of. We know that we’ll have to be really durable and strong to compete week-in, week-out.

“But I think we showed we are capable of stretching ourselves and performing really well against good opposition.

“We just need to take that into every game and have the same approach for what is going to be a relentless period of matches from now until the end of May.”