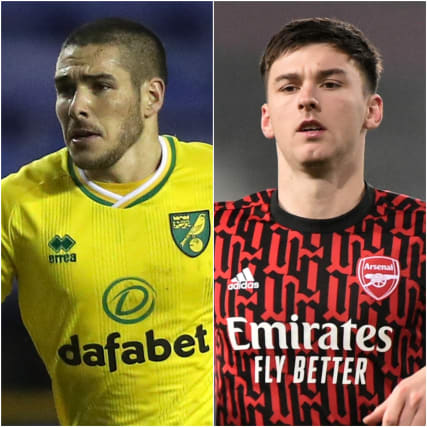 Napoli are set to rekindle their interest in signing Arsenal’s Kieran Tierney having failed to land the defender in previous transfer windows, reports the Daily Telegraph. The paper says the Serie A side lost out to the Gunners when Tierney signed from Celtic in 2019 and will prioritise the signature of the 23-year-old to bolster their defence.

Sticking with Arsenal, and EmiBuendia could be heading for the Emirates, according to the Daily Mirror. The paper says the Norwich attacking midfielder could be an option should Mesut Ozil leave the club in the transfer window.

Ross Barkley has impressed for Aston Villa since joining them on loan, but parent club Chelsea will not let the 27-year-old leave on the cheap, says the Birmingham Mail. Barkley’s Chelsea contract runs until 2023 and he has scored twice in six Premier League appearances for Villa.

Manchester United and Paris St Germain are both keen on landing Brest midfielder RomainFaivre, according to the Sun.

Brahim Diaz: AC Milan are eager to retain the Spanish forward, but the 21-year-old will return to Real Madrid when his loan expires, reports Le10Sport.

Ozan Tufan: Crystal Palace and West Brom will tussle for the signature of the Turkish midfielder, with Fenerbahce wanting at least £14million for the 25-year-old, writes Hurriyet.