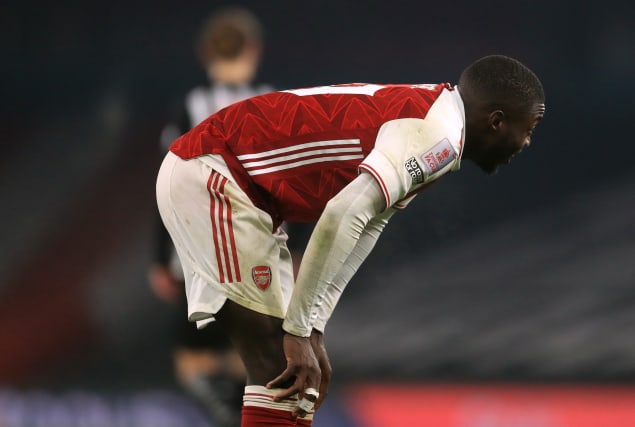 Mikel Arteta is eager to help Nicolas Pepe succeed at Arsenal and has laid out what the club’s record signing needs to do in the upcoming months.

The attacker joined in the summer of 2019 from Lille for a £72million fee and while he has produced moments of quality, a lack of consistency has impacted his time at the Emirates.

After Pepe scored eight goals during his debut campaign, the hope was for the Ivory Coast international to kick on but he has struggled in the Premier League this season and was recently sent off at Leeds.

“We need to help him to (succeed),” Arteta said. “In order to do that he needs minutes, he needs consistency in the team and when he has that, he needs to show he is capable of doing it.

“Let’s see how the next few months develop.”

Pepe has found the net three times in the Europa League this term but only made four league starts and cut a frustrated figure during Arsenal’s 2-0 win over Newcastle in the FA Cup before he was withdrawn with the tie goalless.

The 25-year-old has been an unused substitute in the Gunners’ last two top flight wins and Crystal Palace visit on Thursday with compatriot Wilfried Zaha set to lead the line for the Eagles.

Arsenal notably decided to sign Pepe over Zaha when Unai Emery was in charge, but current manager Arteta has called for patience.

He added: “I think it is hard to make judgement on some players that haven’t played many minutes over the last two or three weeks and to throw them in and expect them to be the best player on the pitch.

“I don’t think it happens and Nico tried. He tried all the game and had some really good moments – moments where he could have scored two or three goals.

“In a normal circumstance and with his ability in those positions, he puts the ball in the back of the net. He didn’t do it but I think his contribution overall was good.”

While Pepe has failed to make the most of his opportunities, Saturday saw Arsenal keep a third clean sheet in a row.

Pablo Mari’s introduction into the team has coincided with the Gunners looking more solid in defence.

The Spaniard moved to north London last January on loan but only played three times before a serious ankle injury ruled him out of action for a large chunk of 2020.

Mari, who signed a permanent deal with the club in June, returned to score against Rapid Wien at the beginning of December and earned a shot in the Premier League when Gabriel was sent off against Southampton and then tested positive for Covid-19 while fellow centre-back David Luiz was absent with a bout of illness.

“We had to throw him in because we had some injuries and suspensions and it probably wasn’t fair for him because he has missed a lot of football in the last year,” Arteta admitted.

“But he is a leader and someone that trains really hard. He is really professional, a great communicator on the pitch and gives you some security and stability.

“I think he has done really well with Rob (Holding). He was really good again with David and with three clean sheets in a row, he fully deserves his chance to play.”