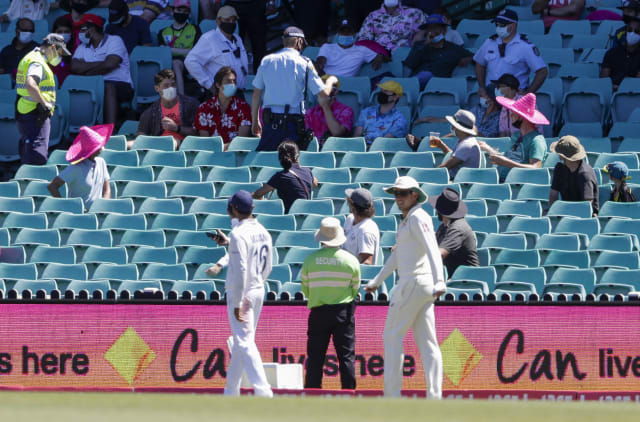 Cricket Australia has launched an investigation after six spectators were ejected from the Sydney Cricket Ground for allegedly abusing Indian players on day four of the third Test.

Indian paceman Mohammed Siraj complained to the umpires and pointed to a section of the crowd near where he had been fielding at fine leg on Sunday.

Police and security guards were called in and later escorted six people from the stadium, as play was held up for almost 10 minutes.

It came after Indian team representatives alerted officials following the third day’s play that players including Siraj and Jasprit Bumrah were subjected to abuse – including that of a racist nature – from members of the crowd, which is restricted to 25 per cent capacity due to Covid-19.

Australia are poised to regain the series lead after losing the second Test in Melbourne, setting India 407 to win.

Sean Carroll, Cricket Australia’s Head of Integrity and Security, said the allegations made by the Indian team would be investigated.

“The abuse of cricketers by crowd members is not acceptable,” he said. “We thank the Indian team for their vigilance in reporting today’s incident, which we are now in the process of investigating.

“A number of spectators were interviewed by NSW Police and subsequently removed from the SCG on Sunday afternoon. While we await the outcome of the investigation by NSW Police, CA has launched its own inquiry into the matter.

“It is most regrettable that an otherwise excellent Test match contested in tremendous spirit by two friendly rivals has been tarnished by the actions of a small number of spectators over the past two days.

“As hosts, we once again apologise to the Indian team.”

With India dismissed for 244 on day three in response to Australia’s 338, the home side declared their second innings on Sunday at 312 for six. Steve Smith followed his first innings 131 by making 81, while Cameron Green scored 84.

India closed on 98 for two, still needing 309 runs to win, after openers Rohit Sharma (52) and Shubman Gill (31) were dismissed by Pat Cummins and Josh Hazlewood.