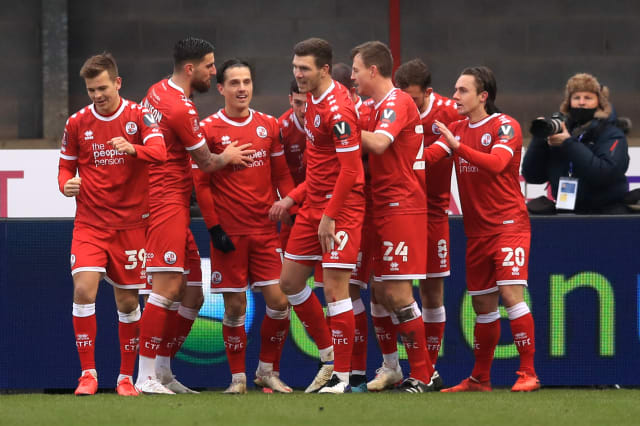 And Yems’ only regret was that the partying would have to take place at home with the current lockdown restrictions.

Yems said: “I think this is the biggest club to have been here and to beat Leeds United, in the way that we beat them as well…

“We had a plan, we stuck to it, and it was all down to the players, they absolutely deserved everything they got.

“I got myself in trouble a little bit because I’m telling all the boys go out and enjoy yourself and make the most of it and, of course, you can’t go out anywhere!”

Yems and his players will find out their fourth-round opponents, and potential fifth-round opposition too, when the draw is made on Monday evening.

Newport came within a penalty shoot-out of another giant-killing, only for Jason Steele to make four spot-kick saves to earn Brighton a nail-biting victory.

Aaron Webster’s own goal in the sixth minute of stoppage time, after a mistake by Steele, cancelled out Solly March’s 90th-minute opener and sent the match into extra-time.

But in a chaotic shoot-out in which seven of the 14 penalties were missed, Steele made amends before Webster converted the decisive kick.

Tottenham came through their trip to eighth-tier minnows Marine unscathed after a hat-trick from Carlos Vinicius helped them to a 5-0 win.

The striker was due to face Birmingham for his first start since October but instead is self-isolating having been a close contact of someone who has tested positive for Covid-19.

After City beat Birmingham 3-0 manager Pep Guardiola, said: “Unfortunately he was in contact, more than usual, with one person who is positive. That is why he must isolate for a few days.

“I don’t know (how long for) exactly because, like all of us, he has been tested six times in last 10-15 days.

“He is negative. Today he is negative too, but the protocol says in some cases they must isolate. In others we are still in touch and playing football.”

Timo Werner ended his 12-game goalless streak as Chelsea won 4-0 against Morecambe at Stamford Bridge, with Mason Mount marking his 22nd birthday with a goal while Callum Hudson-Odoi and Kai Havertz were also on target.