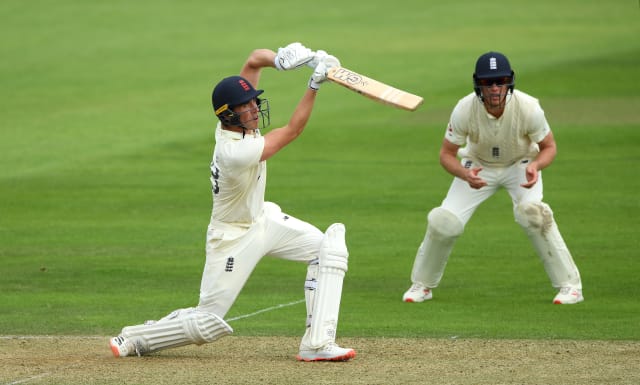 England head coach Chris Silverwood has no doubts that “fighter” Dan Lawrence has the right mentality to step up to the challenge of Test cricket.

The 23-year-old Essex batsman is in line to make his international bow in the first Test against Sri Lanka on Thursday, with the rested Ben Stokes leaving a vacancy in the middle order.

And while Lawrence will be a new face for some, Silverwood has already known him for several years having overseen his progression through the second XI ranks at Chelmsford.

In 2017 the pair helped Essex win their first County Championship in 25 years before Silverwood was invited to join Trevor Bayliss’ England staff.

Lawrence is once again ready to follow and Silverwood has every confidence he is ready to make it another successful promotion.

“He’s a great character and a fighter with lots of skill there as well. Should he get the nod we’ve got every confidence he can be successful.

“He does not get flustered. He doesn’t care who the opposition are, he just loves scoring runs.

“I saw those characteristics in him as a young man coming into the Essex second team and he shows the same characteristics now so it is great to see the consistency. I think he is a very good cricketer and personality.”

Former England skipper Sir Alastair Cook has had even better look at Lawrence’s credentials, having shared a dressing room with him since his international retirement.

He wrote enthusiastically about his young team-mate in his Sunday Times column but conceded he was known as a “leg-side Larry” on the circuit. While that could be perceived as a potential weakness, he would not be the first player to succeed at the top level with a preference off the pads.

Silverwood, at least, sees no reason for concern.

“I think the one thing with Dan he has always played his way,” he said.

“He is strong on his leg side but there is no reason why that can’t be a strength and he can adapt that to Test cricket. You don’t know until they try.”

Moeen Ali, meanwhile, has officially been ruled out of the series opener. That looked inevitable from the moment he tested positive for Covid-19 on arrival and was told to observe a 14-day quarantine.

He is permitted to rejoin the group 24 hours before the match but that leaves no time to get up to match readiness.

“He won’t be available for the first Test. He’s still in isolation but he’s in good spirits,” said Silverwood.

“I spoke to him today and he is as good as he can be having been kept on his own.”

His absence means England have only two spinners in their squad – Dom Bess and Jack Leach – but with Amar Virdi, Mason Crane and Matt Parkinson all in camp on the standby list.

It is not impossible one could be promoted, particularly given England’s success with three slow bowlers here in 2018, with Silverwood set to take a view after assessing the surface on Monday.

“We’ve not seen the pitch down in Galle yet so we’ll see that first and conversations will go from there,” he said.

“We can play plenty of spin if required to. They are all here so they’re available. We travel with such a large group so should any eventuality come up we have it covered.”