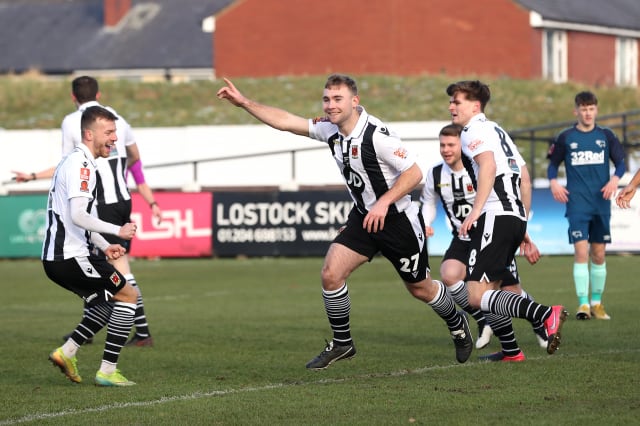 Chorley manager Jamie Vermiglio is dreaming of Anfield after his part-time side claimed an unlikely place in the last 32 of the FA Cup.

The National League North side took advantage of extraordinary circumstances to sink Championship Derby 2-0 on Saturday and reach the fourth round for the first time in their 138-year history.

Four divisions had separated the clubs when the draw was made but a Covid-19 outbreak at the Rams dramatically tipped the tie in favour of the experienced part-timers from Lancashire.

With manager Wayne Rooney and his entire first-team squad forced into self-isolation, Derby needed to draw on their youth squads simply to fulfil the fixture at Victory Park.

With some of their prominent under-23s players also unavailable, development coach Pat Lyons was left in charge of a side with an average age of just 19.

Chorley capitalised with goals from Connor Hall and Mike Calveley, after 10 and 84 minutes respectively, earning them a deserved win.

When asked who he wants next, lifelong Liverpool fan Vermiglio was in no doubt.

“If you can organise it, I’d like Liverpool away,” said Liverpudlian Vermiglio, who has had quite a week as he combines his role as manager with his day job as a headteacher at a primary school in Warrington.

“I’m ecstatic. It’s a really proud moment for me and the club. It’s unreal, just amazing.”

That the game went ahead at all was remarkable, quite aside from the coronavirus issues affecting the opponents.

Sub-zero temperatures in Chorley throughout the week meant the club had to keep the pitch undercover and use heaters to try to prevent it freezing. Their groundstaff even camped out at the ground to keep the operation going overnight.

“The amount of effort to make sure the game went ahead was incredible,W said Vermiglio, whose side return to earth as Leamington visit on Tuesday.

“We had volunteers sleeping here overnight using hairdryers and kettles to make sure the game was on.”

It all proved worthwhile as Chorley’s hardened campaigners overran their youthful visitors.

They did not look back after taking early command as former Bolton striker Hall headed in following a corner.

“What a feeling,” said Hall, who also scored in the first and second round victories over Wigan and Peterborough respectively.

“The boys have been unbelievable against league opposition. Obviously Derby were depleted but they still came here and put up a fight.

“It was good to get an early goal and settle the nerves. They were in the game the whole way through but to get the second was a massive relief, a bit of weight off the shoulders.

“To get a goal and win the game was such a good feeling. I can’t contain it.”