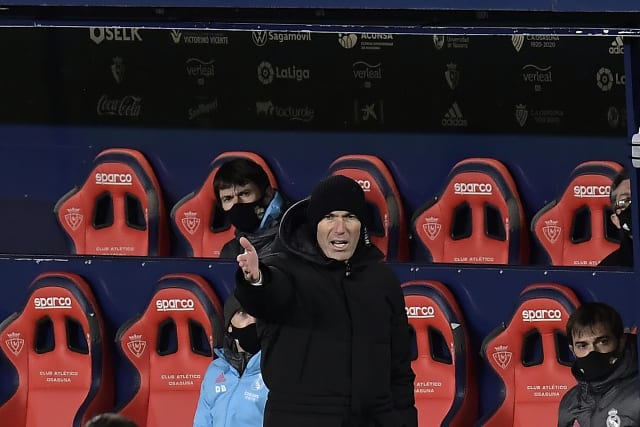 Real Madrid missed the chance to move back to the top of LaLiga after they were held to a goalless draw at struggling Osasuna.

Zinedine Zidane’s men twice had efforts ruled out for offside and struggled on the icy El Sadar pitch as the improving hosts extended their unbeaten league run to four games.

For Real it was a case of what might have been as they ended the weekend one point behind city rivals Atletico, who have played three games less after their own clash against Athletic Bilbao was called off.

Patches of snow on the surface suggested a difficult night was in store and both clubs struggled to get to grips with the conditions in the scrappy early stages.

Eden Hazard and Luka Modric had early half-chances while Roberto Torres fired a dangerous cross across Real’s six-yard box as the hosts slowly grew in confidence.

A largely forgettable first period drew to a close with a fine save from Osasuna keeper Sergio Herrera, who reacted well to pluck the ball away from Hazard after a smart ball into the box from Toni Kroos.

Real started the second half in much more focused fashion and the impressive Marco Asensio fired a goal-bound effort which Herrera kept out of the top corner.

It was the first shot on target for Zidane’s men but they warmed to their task and briefly thought they had grabbed the opener through Karim Benzema.

Herrera reacted brilliantly to keep out the striker’s point-blank header but after Benzema shuffled in the rebound, the flag revealed he would have been offside in any case.

For all their second half dominance the visitors were almost made to pay in the 71st minute when Osasuna missed a brilliant chance to go ahead.

Ruben Garcia clipped the ball into the box and found Torres but despite the striker having plenty of time to weigh up his options, he succeeded only in lifting the ball over the bar.

It was a big let-off for Real and they almost made the hosts pay in the 88th minute when Benzema laid it off to Sergio Ramos who fired home from close range – only to be ruled offside.

Osasuna ultimately proved good value for their point while Zidane will be frustrated by his side’s inability to overhaul the leaders.