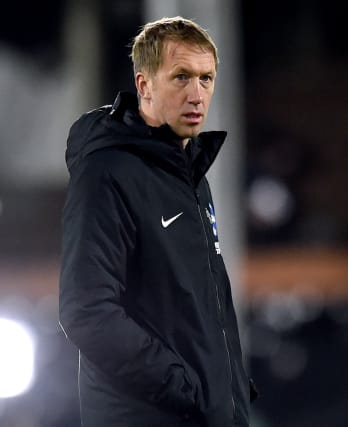 Graham Potter accepts clubs like Brighton will always have Premier League survival as their priority, but believes they should also aim for a decent FA Cup run to help lift their campaign.

The Seagulls head to Sky Bet League Two promotion-chasers Newport on Sunday looking for a respite from the battle to stay up.

Potter saw his side fight back from 3-1 down to draw with Wolves last weekend, and they now sit three points above the drop zone – albeit having played two matches more than 18th-placed Fulham.

Trips to Manchester City and Leeds follow next week, before a crucial showdown against the Cottagers at the Amex Stadium on January 26.

Given the challenges ahead of keeping themselves in the top flight, also juggling a cup run would perhaps fall lower down Potter’s ‘to-do list’ for 2021.

The Brighton manager, though, views it as an opportunity to boost confidence as the fight for survival hots up.

“The priority would be the Premier League, I think that is fair and most people would understand that,” Potter said.

“But at the same time, you can still be competitive and try to go through in the FA Cup.

“It is a special competition and can provide some positivity to your campaign, and also just allow you to develop as a team and as a club.

“As we approached the Carabao Cup, we tried to win (the ties), to go through and progress.”

Sunday’s televised FA Cup third-round clash at Rodney Parade, though, presents anything but an easy ride for the Premier League outfit.

A hot-air dome is being used to help protect the pitch with rugby union club Dragons set for their Guinness PRO14  match against rivals Ospreys late on Saturday afternoon.

Michael Flynn’s Exiles have a great cup pedigree in recent seasons – and knocked Leicester out in the 2019 third round.

Potter said: “We can’t influence the draw and we have to play whoever, wherever we are drawn.

“Newport are a team that have got a history of performing against teams in higher divisions and knocking them out.

“As a team they have developed so they are pushing for promotion. Credit to Michael (Flynn), he has done fantastically well.

“We have a lot of respect for him and the cup competition.

“We will go with the mentality that we want to win the game, we will respect our opponent and to do our best.”

Potter does not feel Brighton’s task is made any easier by the fixture being played behind closed doors.

“If you look at their results, they have got them without supporters there, so they have got a good identity, a good idea of how they want to play,” the former Swansea boss said.

“They believe in each other and will be fighting to beat us, so we have to bring our own game.”