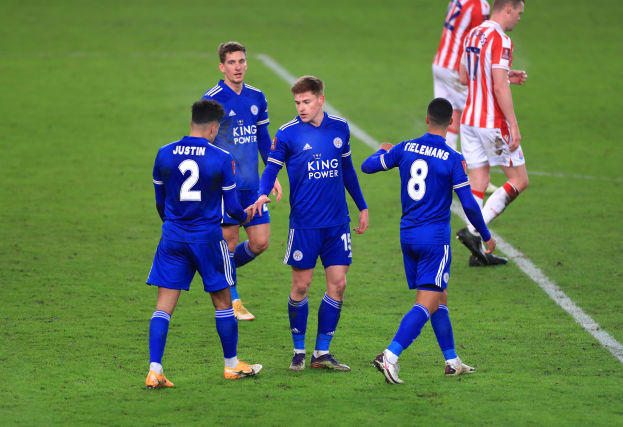 Leicester boss Brendan Rodgers hailed an “excellent” performance from his side after the Premier League high-fliers thrashed Stoke 4-0 at the bet365 Stadium to advance into the FA Cup fourth round.

The Foxes took the lead in the 34th minute via a superb James Justin effort, shortly after Sam Vokes failed to convert a good chance for the Championship hosts.

Marc Albrighton doubled the advantage with a 59th-minute finish, Ayoze Perez made it 3-0 with 11 minutes of normal time to go, and Harvey Barnes added a fourth for the visitors two minutes later.

Rodgers said: “I think all round it was a very, very good team performance. They had a really experienced team, some really good players.

“We had to stay strong in that first 10, 15 minutes of the game. I thought we defended well, showed our quality and then once we got the first goal, some of our play was very, very good. It was an excellent performance.

“You can see the level and how the team can go through the gears. Once we got the goal it was very good.”

The opener came when Justin collected the ball on the left, danced past two Stoke men as he cut inside and hit a delightful shot past fellow England Under-21 international Joe Bursik and into the top corner from just outside the box.

Rodgers said of full-back Justin: “His finish was great, coming inside, and you see the level of confidence he is playing with. It was an outstanding finish.”

While Leicester were without Jamie Vardy and James Maddison, who had been nursing injuries, Rodgers named a strong team, with that pair being replaced by Perez and Dennis Praet the only changes from the 2-1 win at Newcastle last weekend.

Leicester, third in the Premier League, are next in action when they host Southampton next Saturday.

And when asked about the side he had selected, Rodgers said: “If the players miss out today then they don’t play for two weeks. We have a purpose in the competition, we want to do well.

“So I wanted to pick the best team I possibly could. Obviously the two boys were unavailable through injury, so we couldn’t play them.

“This is a competition where, OK you need a bit of luck along the way, but you need your best players to hopefully get through.”

Rodgers said midfielder Praet had sustained what appeared to be a hamstring injury.