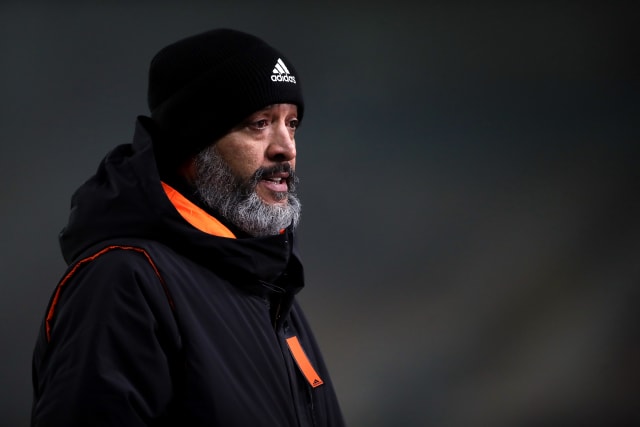 Wolves boss Nuno Espirito Santo insists his team – and in particular Fabio Silva – must be more clinical in front of goal after edging past Crystal Palace in the FA Cup.

Wanderers won 1-0 at Molineux as a superb solo goal by Adama Traore settled the third-round tie, but it might have been a more comfortable night for Nuno’s side had Silva taken one of two golden opportunities that came his way.

Silva should have opened the scoring after only 12 minutes but somehow managed to head the ball over the crossbar from eight yards out following some good work down the left by Pedro Neto.

Then, early in the second half, the teenage forward missed the target with another free header, before the fit-again Leander Dendoncker was denied by Palace goalkeeper Jack Butland when he was in a good goalscoring position.

Nuno was frustrated that Silva did not take one of his chances but he was pleased with the 18-year-old’s all-round play.

“Fabio did a good game but he needs chances and should do better, especially with the cross off Pedro. He needs to do better, it can not always be sorry and there is a lot of work there to be done,” said the Wolves boss.

“He has to approach the situation better. When you are in the six-yard box you have to be decisive, and that will come. But I am pleased with the way he kept the shape and worked, it is not easy to lead the line up front alone. But he needs to be more clinical.

“He needs to think about the actions and with the talent he has it will come.

“But the whole team needs to be more decisive and clinical also when chances come. I think we played good in the first half, it was good in terms of possession of the ball and we didn’t allow anything in terms of gaps in the pockets. We scored a good goal also. In the second half, not so much, but we did create a good chance with Leander.

“The boys worked very hard in the middle of the park and we played really well and kept the ball.”

Traore struck after 35 minutes. The 24-year-old skipped past Eberechi Eze out wide on the right with a lovely piece of skill before shifting the ball onto his left foot and powering a shot beyond Butland from the edge of the penalty area.

The Palace goalkeeper got a hand to the ball but there was too much power on the shot for him to keep it out.

Traore was withdrawn after 69 minutes but Nuno insisted it was merely a precautionary measure.

“It was cramp and we didn’t want to push him any more with the schedule as we have some very important games coming up,” said the Portuguese.

A disjointed Palace team which included nine changes and saw talisman Wilfried Zaha start the tie on the bench never troubled goalkeeper John Ruddy, who was one of just two changes made by Nuno.

Visiting boss Roy Hodgson accepted his team did not do enough to get back into the match, and also revealed that defender Mamadou Sakho came off at half time due to injury.

“He came off because he was injured. We don’t know what it is yet, we need to get him back to the training ground and have a look at it and assess it, but it was bad enough that he couldn’t continue,” said Hodgson.

“I don’t know the extent of it but he has some sort of thigh strain, of that there is no doubt.

“In the game, there were no shots on target (for Palace) but there were plenty of balls across the six-yard box that needed to be cleared away and sometimes, I feel, they can be just as important in the analysis.

“We lost to a wonder goal, and there seems to be a few of those going in against us, but we didn’t create enough chances to get back into the game.”