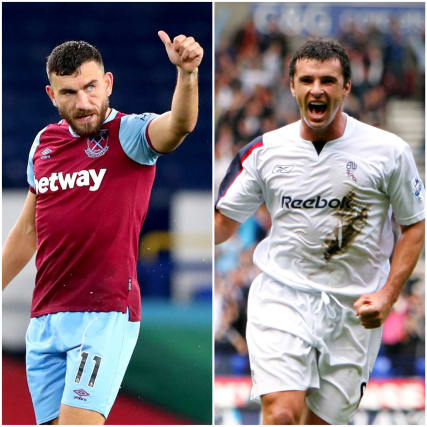 Sam Allardyce hopes Robert Snodgrass can have a similar impact at West Brom to the one Gary Speed had at Bolton nearly 17 years ago.

Snodgrass, 33, is expected to complete a free transfer from West Ham on Friday after completing his medical, having agreed an 18-month deal at The Hawthorns.

The winger will become Allardyce’s first signing since he took over from Slaven Bilic last month.

Snodgrass will join a club deep in a relegation battle, but Allardyce said he had experience and leadership qualities which can prove vital for West Brom in the coming months.

“I hope he’s like Gary Speed for me at Bolton,” said Allardyce, who signed the then 34-year-old Speed from Newcastle in 2004.

“He might be getting on but in his mind he still thinks he’s 20. He runs all day, he’s got great quality and a huge amount of experience, and he never gives up.

“Hopefully that will rub off on some of these players who will look at him and say, ‘My word’. Lifting the spirits and lifting the standards is very important at a professional football club and even more important at a Premier League club.”

Allardyce is hoping Snodgrass is just the start of West Brom’s January business, with a striker next on the wishlist as Karlan Grant faces up to six weeks out with a broken bone in his foot.

But the Baggies boss said reports linking the club with Newcastle’s Andy Carroll were wide of the mark, with a signing more likely to come from abroad.

“I’m looking for a front man, but I don’t believe Andy is available at the moment,” he said.

“Steve (Bruce) like everybody else needs all his options at this particularly difficult time.

“I’m not looking at Andy. I am looking at a front man and hopefully that will be coming through the door as quickly as possible, but that would be from abroad rather than this country.”

After the training ground was closed for a deep clean, further tests conducted on Wednesday all came back negative.

However, as the virus continues to cause postponements and disruption, Allardyce said previous reports that he wanted a “circuit-breaker” to the fixture list were “misconstrued”.

“I said that if the science was right then it would be a good thing, and then I was portrayed all over the papers as saying we must, and that wasn’t the case,” he said.

“I am obviously, and we all are, concerned about the spread of this virus, and for everybody’s safety.

“We’re back to testing twice a week, using masks and sanitiser and we speak to the players to make sure all protocols are followed.

“We had a handful this week, but we’re comfortable with where we are at the moment and looking forward to playing in the FA Cup at Blackpool.”

Saturday’s cup tie will take Allardyce back to one of his first clubs in management, something he said would be “bittersweet” given the manner of his abrupt departure from Bloomfield Road after narrowly missing promotion in 1996.

Allardyce plans to make sweeping changes to his side but challenged those coming in to prove they were good enough to help West Brom’s relegation fight this season.

“It’s impossible to play a full-strength side because of fatigue,” he said. “It’s been game after game and this is the first week where we can get other squad members into the team – experienced players who have played all over the world.

“They’ve got an opportunity to show me they’re good enough. They can say, ‘Here we are, gaffer, pick us’.

“That is their challenge. They’ve got to show us, not tell us, they’re good enough to play for West Brom, and if that’s not motivation for them to win I don’t know what is.”