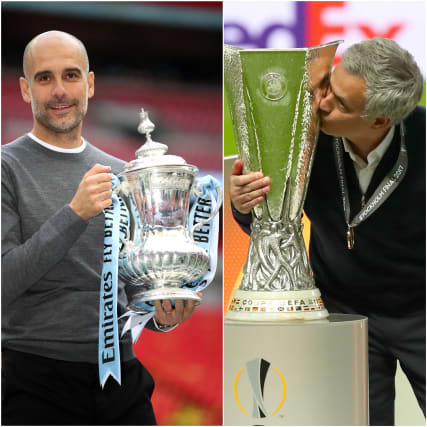 Pep Guardiola and Jose Mourinho will both look to extend their superb records in major finals after Manchester City joined Tottenham in the Carabao Cup final.

The rival managers have won 22 out of 26 between them on such occasions, with the League Cup a particularly happy hunting ground.

Here, the PA news agency takes a look at their previous major finals.

Winning the Copa Del Rey and Champions League – along with LaLiga – in his first season as manager of Barcelona’s senior team set the tone for Guardiola’s record in major finals.

He has won 10 out of 11 in his managerial career, leading Barca to a second win in each of those knockout competitions and Bayern Munich to two DFB Pokal successes before joining City.

Since then, he has added an FA Cup and three League Cups to his extensive trophy collection, which also now runs to eight league titles across Spain, Germany and England, a host of Super Cups and Community Shields and three Club World Cups.

It is worth noting, however, that his one defeat in a major final came in his only previous meeting with Mourinho on such an occasion, when Cristiano Ronaldo’s extra-time goal gave Real Madrid victory over Barca to win the 2011 Copa Del Rey.

After brief spells at Benfica and Uniao de Leiria, Mourinho’s mid-season move to Porto in January 2002 also saw him wrap up a trophy treble as his side added the Portuguese Cup and what was then the UEFA Cup to their league title.

They stepped up to memorably win the Champions League the following season, though they lost in the domestic cup final, with their success earning Mourinho a move to Chelsea.

His first spell brought an FA Cup and a pair of League Cups, while his side never finished outside the top two in the Premier League.

He won a Coppa Italia and his second Champions League with Inter Milan and led Real Madrid to that Copa Del Rey win over Guardiola’s Barca, though they lost another final to Atletico Madrid.

Since returning to England, he has won further League Cups with Chelsea and Manchester United, also winning a Europa League and losing an FA Cup final with the latter for an overall record of 12 wins and three losses in major finals.

Mourinho and Guardiola have played in seven League Cup finals between them, winning all seven – a record in which something has to give this April.

Mourinho has more wins in the competition – Chelsea beat Liverpool in 2005 and Arsenal in 2007 in his first spell and Spurs in 2015 after his return, with Manchester United’s 2017 win over Southampton marking the fourth time Mourinho has lifted the trophy.

Guardiola and City, though, have dominated the competition in recent times and are sure to go in as favourites. Back-to-back wins over Arsenal, Chelsea and Aston Villa leave the Spaniard seeking a fourth straight League Cup win.