Morecambe manager wise ahead of FA Cup challenge at Chelsea 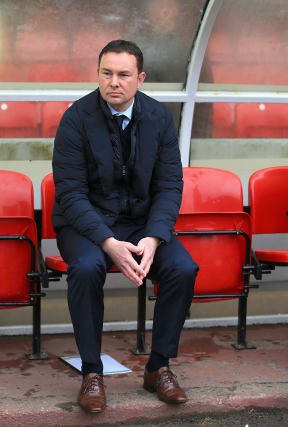 Derek Adams admits the pressure on Frank Lampard will only serve to intensify the challenge facing Morecambe in Sunday’s FA Cup clash at Stamford Bridge.

The League Two club are back in full training after a Covid-19 outbreak, with the full squad undergoing testing on Thursday morning ahead of their third-round clash in west London.

Shrimps boss Adams knows well the battle that lies in wait this weekend, with his side having reached the third round for the first time in 18 years.

“I think Chelsea’s form makes it more difficult for us, there’s no doubt about that,” Adams told the PA news agency.

“Because there’s obviously pressure on Chelsea to get through to the next round, we know that, and they were FA Cup finalists last season.

“So we know that the game for us is going to be difficult.

“But I think it will be harder than it probably could have been, because if they were winning games then it might have been a wee bit easier for us.

“We’re back in training, we came back into training late on Tuesday night.

“And we are preparing for the game on Sunday, along with all the other teams in the FA Cup we get tested again 72 hours before the game, and we’ll see from there.

“To be fair the players have come back in and they’ve trained well.

“They’ve had 10 days off, isolating in their own homes, and they are obviously looking forward to getting back training and getting going again.

“They are looking forward to the game on Sunday, and they are in good spirits. We’re fine, and we have no injuries going into the game.”

Former Ross County and Plymouth manager Adams has steered the Lancashire club to seventh in the League Two table – but his team have not had a fixture since the 3-1 win over Grimsby on Boxing Day.

While that hiatus has obviously stalled Morecambe’s momentum, Adams insists his side will head to Stamford Bridge full of confidence and determined to showcase their talents.

“I don’t think it’s going to be any different without the fans overall,” said Adams.

“Chelsea have been used to playing with no fans, but the quality of opposition doesn’t change.

“I think the players actually have to be more concentrated without the fans, because of the lack of atmosphere, they have to just switch on very quickly.

“And going into this game we know that Chelsea will start at a pace, because they are at home and they want to progress to the next round.

“So we have to analyse that very quickly in the game, that they are going to come out of the blocks as quickly as possible.

“I think going into the game against Chelsea’s obviously going to be difficult because of the outfit they are. But what we can do is go and give it a good shot.

“To get into the FA Cup third round for the first time in 18 years is very good for the football club.

“We’re all disappointed that supporters can’t be there, because I’m sure there would have been thousands travelling down for the game.

“But it’s live on the television, which is obviously very useful as well.

“We’ll not benefit as much as we would have done if supporters were there.

“We’ve done quite well out of television revenue in the previous rounds, and we’ll do well out of this one as well.

“Any money that you haven’t budgeted for is welcome, and at this football club anything that comes in, they’re delighted.”

Sir Mo Farah: Athletes have been told they will receive vaccines before Olympics