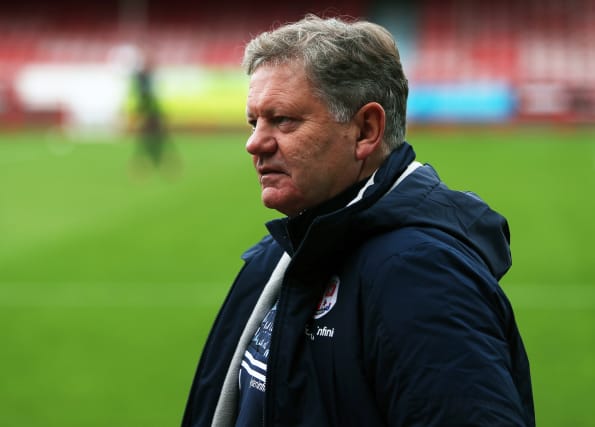 The West Sussex side cannot fully capitalise on the financial benefits of facing Premier League opposition due to the current nationwide lockdown preventing fans from attending.

While bumper gate receipts are out of the question, winners of the televised tie at Broadfield Stadium are set to pocket £61,500 from the Football Association, while the losers will collect £20,500.

In-form Crawley, who are currently in Sky Bet League Two promotion contention, will also receive TV money from arguably the biggest game in their history.

Yems insists keeping the club afloat is his main concern as lower-league sides across the country battle the harsh financial impact of the coronavirus pandemic.

“I just hope Leeds donate their money back to us, which would be a very good gesture, so we can start paying for a few things,” said the 61-year-old.

“You wouldn’t get as much as you would normally because of no crowd.

“But in the current climate, big clubs, it would be nice like they used to in the old days that some clubs might donate a little bit back to you.

“There are a lot of clubs that have got their backs to the wall – I’m not saying we have – but (my priority is to) make sure all the players are healthy and we’ve got a football club at the end of it all.

“That’s what’s important to me.”

Crawley’s coffers could be set for a further boost due to the red-hot form of top scorer Max Watters.

Striker Watters, signed for free in October following his release from Doncaster, has been linked with a host of bigger clubs after hitting 15 goals in 17 appearances.

The 21-year-old scored in the previous two rounds of the cup but is a doubt to face Marcelo Bielsa’s men due to a hamstring problem which kept him out of Town’s last two games.

“We won’t make the decision on Max, I would say, until Sunday morning,” said Yems, whose side are unbeaten in nine matches and sit sixth in the fourth tier, five points off top.

“He’s going to have a fitness test as he is still struggling, he’s pulled a hamstring.

“We won’t really know until then so we’ll just have to wait and see.”

Yems believes his side have nothing to lose against the 1972 FA Cup winners and has encouraged his players to put themselves in the shop window.

However, he is also eager to avoid piling unnecessary pressure on his squad.

“This is just a bonus. It’s a fantastic opportunity for everybody playing a side with great traditions, great history and I know we will give them a decent game,” he said.

“It’s nice to pit yourself against a side that are a couple of leagues above us but our players will give a good show of themselves and hopefully some of them make a good name for themselves and make a career out of it.

“We’ll try and keep it as much as we can normal because if we start trying to build it up like it’s an impossible task then you just put added pressure on yourselves and the players, which you don’t need to. “