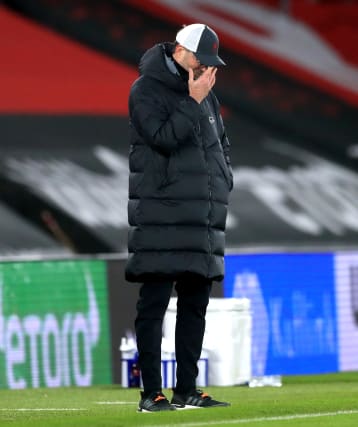 The magic of the FA Cup will be alive and kicking this weekend, with the big guns entering the competition during third-round weekend.

There are both all-Premier League clashes and classic David and Goliath showdowns among a fixture list which has thrown up a series of talking points.

Here, the PA news agency takes a look at some of the most interesting.

Fairly cross on the Mersey

Premier League champions Liverpool have become accustomed to sweeping almost all before them in recent seasons, but will head for Aston Villa on Friday evening smarting. The Reds have not won in three games after failing to beat both West Brom and Newcastle before losing to Southampton. They have not gone four matches without a victory since September-October 2018, when they were defeated in League Cup and Champions League ties by Chelsea and Napoli respectively and drew with the Blues and Manchester City in the league. They have been to Villa Park already this season – and lost 7-2.

If ever a tie summed up the FA Cup, is is the one that will send Premier League giants Tottenham and their charismatic manager Jose Mourinho to Marine on Sunday. The Merseyside club play in the Northern Premier League North West Division, four rungs below the Football League, and a team which includes a binman, teachers and supermarket workers has already worked its way past Barnoldswick Town, Frickley Athletic, Runcorn Linnets, Nantwich Town, Chester, Colchester and Havant and Waterlooville. Coronavirus restrictions which mean the game will take place behind closed doors have cost Marine around £100,000 in lost revenue, prompting them to stage a virtual raffle in which first prize is the opportunity to take over as manager for a pre-season friendly. Imagine if Mourinho won it.

Marine’s hopes of causing an upset may be remote, but National League North Chorley may feel they will never have a better chance of claiming a Sky Bet Championship scalp and a place in the fourth round. Derby County will send a team of Under-23 and Under-18 players to Victory Park on Saturday with manager Wayne Rooney, his staff and their entire first-time squad bubble self-isolating after nine positive Covid-19 tests. The Magpies have already put League One duo Wigan and Peterborough out of this season’s FA Cup.

If any team needs a win this weekend, it is Sheffield United. The Blades sit at the foot of the Premier League having collected only two points from their first 17 games and have lost 16 of the 18 they have played in all competitions so far this season. Indeed, they last tasted victory in a 3-0 league win over Chelsea on July 11, some 22 fixtures ago, and they will hope a trip to League One Bristol Rovers represents a chance to launch a fightback.

Punters looking for a safe bet on Sunday should perhaps avoid backing a 0-0 draw at Crawley. The League Two side entertain Leeds at the People’s Pension Stadium, with the top-flight side’s last seven games having yielded 31 goals, 15 of them from Marcelo Bielsa’s men. Crawley, who have managed just a single clean sheet in their last 12 outings, also have form. Their first round trip to Torquay ended 6-5 after extra time.