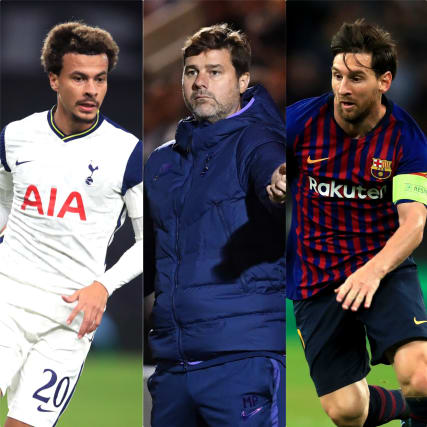 Mauricio Pochettino was named as the new Paris St Germain head coach on Saturday, landing his first job since leaving Tottenham in November 2019.

The 48-year-old could be looking to add to his already impressive squad as he faces a three-way fight for the Ligue 1 title with Lyon and Lille.

Here, the PA news agency takes a look at who the Argentinian could target in the January transfer window.

The 24-year-old has not started a Premier League game for Tottenham since the opening day of the season and has been limited to just 11 appearances for Jose Mourinho’s side this term, compared to 38 in the previous campaign. Alli has been linked with a move to PSG in the past, with Spurs chairman Daniel Levy reportedly not wanting the midfielder to leave. But the England international enjoyed the best spell of his career at Spurs under Pochettino, who is known to be an admirer of a player he considers “special”.

Eriksen left Tottenham in January 2020, two months after Pochettino’s departure, to join Serie A club Inter Milan, but the switch has not worked out as well as the Denmark midfielder would have hoped. The 28-year-old played a crucial role for Pochettino’s Spurs and was a key part of the team which reached the 2019 Champions League final. He has made just five starts for Inter this season and could welcome a reunion with his former boss.

Pochettino was known, during his time in north London, to have a close bond with Lloris, and reports were quick to emerge following the Argentinian’s appointment at the Parc des Princes that he might want to take the 34-year-old France goalkeeper back to his homeland. And Lloris, who joined Tottenham from Lyon in 2012, is in the final 18 months of his contract. But whether Mourinho would be keen to part with a player he last month described as “the best goalkeeper in the Premier League” is another matter.

The new PSG boss has already said “any big player in the world” would always be welcome at the club, and they do not come much bigger than Messi. The six-time Ballon d’Or winner ended up staying at Barcelona having handed in a transfer request last summer, but remains unsettled and is known to have issues with the board at the Nou Camp. He is in the final six months of his contract with the Catalans and could fancy the prospect of linking up again with former Barca team-mate Neymar.

The 27-year-old Argentina forward has been at Juventus since 2015 but has frequently been the subject of transfer speculation in that time. He has won five Serie A titles in Turin, but this term has scored just three times in 14 appearances. His contract with the Bianconeri expires in 2022.