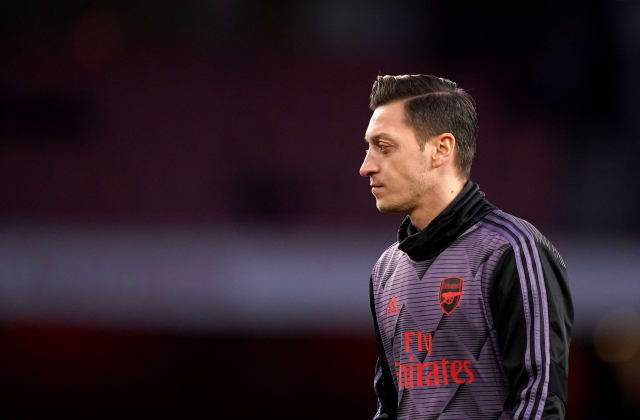 Mesut Ozil’s future should become clearer within the next 10 days – but his “priority” is to stay at Arsenal until the end of the season, according to his agent.

Ozil, 32, has been left out of both Arsenal’s Premier League and Europa League squads for the current campaign.

As he enters the final sixth months of his lucrative deal with the Gunners – which is said to be worth some £350,000-a-week – the German World Cup winner can now talk to overseas teams.

Arsenal manager Mikel Arteta is looking to continue to trim the numbers during the January transfer window, with defender Sead Kolasinac having returned to former club Schalke on loan for the rest of the season.

Former Real Madrid midfielder Ozil has been linked with moves to Major League Soccer outfit DC United as well as Fenerbahce in Turkey.

Ozil’s agent Dr Erkut Sogut maintained, while his client’s focus was currently on seeing out his time at the Emirates Stadium, the situation could yet quickly change.

“We were not allowed to talk legally before January 1, so now we are just starting to look at the options with the numbers and details,” Sogut told ESPN.com.

“I can’t talk about the clubs directly because it would be unprofessional, but generally, there is six months left on the contract and it is nothing unusual that we will talk to people about different opportunities and try to find the best option for Mesut.

“Mesut’s priority is to stay, but you never know in football, things can change very fast.

“For the moment, we are just checking all the options for January and the summer.

“If we want to leave in January, I need to talk to Arsenal. If we sign for the summer (with another club), we don’t need to. That’s the situation.

“In the next seven to 10 days, it will be a little clearer as now the transfer window is open, things can move faster.”

The pressure on Arteta has been lifted following three straight Premier League wins, with Arsenal now up to 11th in the table.

The Gunners begin their FA Cup defence at home against Newcastle in the third round on Saturday.