Pacers edge out Pelicans in overtime 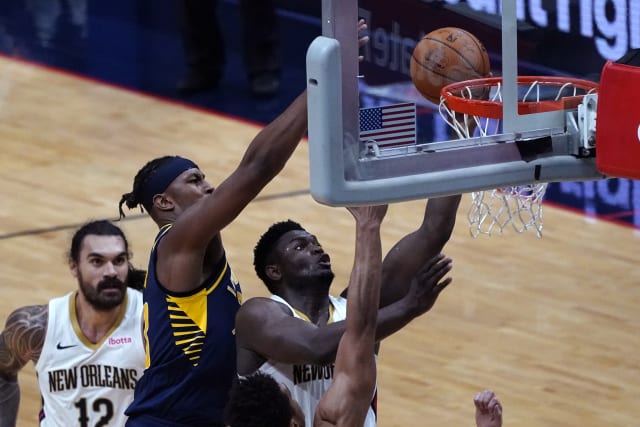 The Indiana Pacers continued their strong early form with a thrilling 118-116 win in overtime against the New Orleans Pelicans on Monday, moving to a 5-2 win-loss record for the season.

Malcolm Brogdon put the cream on a 21-point, 11-assist contribution by dropping a one-handed floater in for the winning basket with 1.7 seconds left on the clock.

Victor Oladipo scored 25 points for Indiana, his long-range three-pointer sparking a six point rush in the last 20 seconds of regular time to force the extra period.

Brandon Ingram led the Pelicans with 31 points while Zion Williamson had 24 and 10 rebounds.

Dual MVP Giannis Antetokounmpo had a day out in scoring 43 points as the Milwaukee Bucks beat the Detroit Pistons 125-115 and moved above the .500 mark for the first time this season.

Antetokounmpo scored 30 points before half time, shot 17 of 24 from the field and finished with nine rebounds, as the Bucks went to 4-3 for the season in extending their winning streak against the Pistons to eight games straight.

Khris Middleton had 19 points to be well behind Antetokounmpo as second-highest scorer for Milwaukee, who led 67-56 at the half and pulled out to a 97-80 lead at the last break.

Jerami Grant and Derrick Rose had 24 points each for Detroit, who are now 1-6.

Kelly Olynyk dropped five three-pointers in a 19-point haul and Bam Adebayo made nine of 10 attempts in yielding 20 points as the Miami Heat crushed the Oklahoma City Thunder 118-90.

Jimmy Butler contributed 18 points for the Heat, who blasted away from the visitors after scores were locked 26-all at quarter-time to lead by 91-66 at the last change.

Shai Gilgeous-Alexander scored 18 points for the Thunder, who benched their starters in the fourth quarter while falling to 2-3 for the season.

In other games, the Golden State Warriors crushed the Sacramento Kings 137-106, the Boston Celtics beat the Toronto Raptors 126-114, the Dallas Mavericks won 113-100 at the Houston Rockets, the New York Knicks won 113-108 at the Atlanta Hawks, the Philadelphia 76ers beat the visiting Charlotte Hornets 118-101, and the Orlando Magic won at home, 103-83 over the Cleveland Cavaliers.