James Rodriguez: I chose Everton as I needed a club where I could be trusted 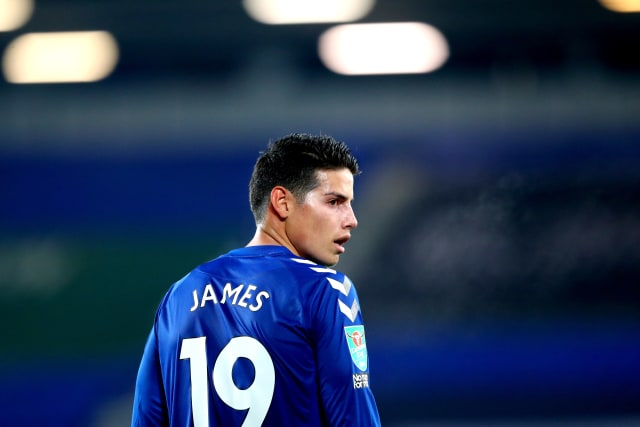 Colombia playmaker James Rodriguez admits he chose to sign for Everton as he needed a club where he would be trusted.

The 29-year-old was reunited with his former Real Madrid manager Carlo Ancelotti at Goodison Park after an indifferent time on loan at Bayern Munich and his final year at the Bernabeu.

Ancelotti has allowed Rodriguez to play to his strengths and was rewarded in the early part of the season when he was highly influential.

A calf injury saw him miss five matches and he is still working his way back to full match fitness and – after a brief substitute appearance in Friday’s defeat to West Ham – he could feature in the FA Cup against Rotherham this weekend.

“I had to go to a team where I could be trusted,” Rodriguez, speaking to evertontv, said of his transfer to Everton.

“I needed to play under a coach who knows me, how I behave on and off the pitch.

“I’ll be forever grateful to the club and to Carlo. That is why I try to show my best and play at my highest level in every game.

“It’s been a big help coming at this time (later in his career). You have the background, good and bad experiences, they are all lessons learned.

“I’ve played in many other leagues but here players are stronger, they play more physically and they are always looking for the ball.

“Football is not only about running. It is about making your team-mates play the best way and helping them win.

“When one’s talented and skilled, one can play anywhere. I want to help the team so they can play at the highest level.”

With Everton only four points off leaders and defending champions Liverpool, Rodriguez has set his sights on Champions League qualification.

“This is a club which has hunger to accomplish big things. This year, I am watching the Champions League from home but I think we’ve got what we need to be there next year,” he added.

“We have to be hungry to succeed in every game. We have talented, top-level players and if we all follow the same path, I’m sure we’ll be able to accomplish awesome things.”