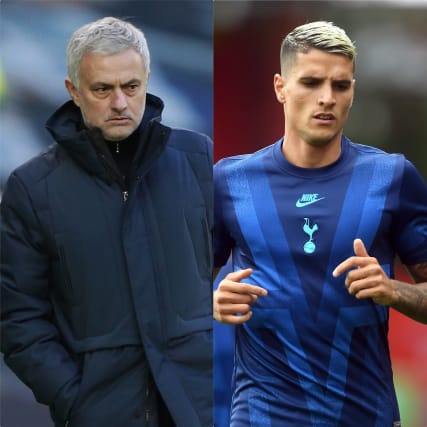 Erik Lamela will not be available for Tottenham’s Carabao Cup semi-final against Brentford on Tuesday following his coronavirus rule-breaking.

The Argentinian was one of three Spurs players pictured together contravening strict tier-four measures at a large gathering over the Christmas period.

Giovani Lo Celso and Sergio Reguilon were the others, with West Ham’s Manuel Lanzini also in attendance.

Lo Celso is injured and Reguilon was on the bench for Saturday’s 3-0 win over Leeds, but Lamela was not in the squad and boss Jose Mourinho has said he will again not feature in midweek.

Mourinho would not confirm whether Lamela had tested positive for coronavirus or was in self-isolation as a result of the party, insisting it was not up to him to explain his player’s absence.

“Not available. Not available,” the Portuguese said when asked whether Lamela would play on Tuesday. “It’s not for me to tell you. I just tell you that against Brentford he cannot play.”

Lamela being sidelined is something midfielder Harry Winks knows about, with the England international falling out of favour with Mourinho for the first part of the season.

Winks was jettisoned from Mourinho’s Premier League side and played only a bit-part role in the Europa League group stages, leading to speculation he would be looking to leave this month.

He has fought his way back into the side, starting the last two Premier League games, but admits it has been a difficult campaign.

“It’s been a bit of an up-and-down season for me so far,” he said. “I’ve had some good games when I’ve been in and I’ve had a few games where I’ve been left out and not been involved, which has been difficult.

Spurs are two wins away from ending a 13-year trophy drought as Brentford and Manchester United or Manchester City stand in the way of silverware.

Winks was at Wembley when Spurs beat Chelsea to win the League Cup in 2008, but he says the squad are not bothered by the constant reminders about how long it has been since they won a trophy.

“I was in the stand with my dad,” he said. “We were in the top tier at Wembley and I remember being there for an hour after the game watching all the players celebrate on the pitch.

“It would be brilliant if we could do the same this season.

“We don’t take too much notice of what people say about that.

“We’ve wanted to win a trophy every season, regardless of what people have said. Every footballer in the world wants to win trophies and we’re no different.

“We obviously know there has been a bit of hype around Tottenham not winning a trophy for so long. But that hasn’t changed our mindset. We still want to win a trophy.”