Ruben Neves: Wolves need to learn from collapse against Brighton 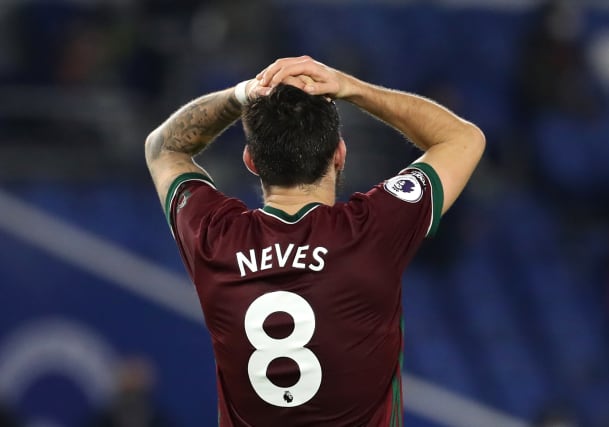 Wanderers were cruising to victory on the south coast after Neves’ penalty gave them a commanding 3-1 advantage at the end of a dominant opening 45 minutes.

But the visitors paid a heavy price for conceding a spot-kick within 11 seconds of the restart as the battling Seagulls recovered to claim a deserved point.

“It’s our responsibility. Great job on the first half, but a Premier League team cannot start the second half like we did,” he told Wolves’ official website.

“No excuses, totally our responsibility.

“We need to take it, to think about it, it’s about learning and going for the next one.

“We’ve been told this during all the season: we cannot start the second half like we did.

“In the first minute (of the second half) we conceded a goal, it’s completely the opposite to what we spoke about in the dressing room at half-time.

“It’s about growing and thinking about what we did bad.”

Wolves had been in complete control at the Amex Stadium after Romain Saiss’ header, Dan Burn’s own goal and Neves’ first goal of the season swiftly overturned Aaron Connolly’s opener.

The West Midlands side have now gone 10 top-flight games without keeping a clean sheet, winning only twice during that run.

Manager Nuno Espirito Santo accepts his team have significant room for improvement at the back and must tighten up.

“We are defending bad. We are making mistakes that we shouldn’t make,” he said.

“We have to improve individually and as a team. We have to be much more aggressive, we have a long way to work.”

A point for Brighton moved them three clear of the relegation zone, albeit having played two games more than 18th-placed Fulham.

Graham Potter’s men remain without a home league win this term and have recorded a solitary success in their past 15 fixtures.

He believes the manner of the draw demonstrates his players are up for the challenge of scrapping for survival.

“It’s an important point against a good team,” said Potter.

“We’re disappointed with the scoreline at half-time but the way we responded was fantastic.

“Clearly when you are 3-1 down at home you’re suffering, it’s hard.

“You have to dig in and find something from somewhere and I thought the players did, magnificent effort, great reaction.”