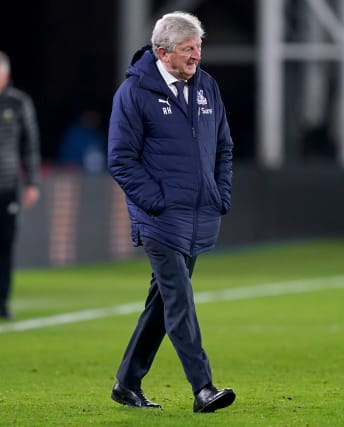 Pictures emerged on social media on Friday which showed the Serbia international with Fulham forward Aleksandar Mitrovic along with their two families on December 31.

With London in tier four and household mixing not allowed, both broke Government guidelines regarding the coronavirus pandemic.

While disappointed with his skipper, Hodgson stressed he was right to pick the midfielder after both players returned negative tests for Covid-19.

“In that respect we weren’t concerned about breaching any Premier League protocols and therefore I think it was correct Luka played the game,” the Palace manager said.

“It was a question of him in his household having his fellow Serb Mitrovic round to join them, so that is a clear breach of coronavirus rules.

“We condemn it, we certainly apologise for it and I am sure Luka will as well. As far as I am concerned he must take full responsibility for that.

“It is an internal matter that we will deal with but as far as I am concerned there is nothing positive I can say on the matter.”

Hodgson insisted talk of stripping the 29-year-old of the captaincy or dropping him for the clash with Sheffield United was wide of the mark even though Mitrovic’s club Fulham have had a coronavirus outbreak which has forced their fixtures with Tottenham and Burnley to be postponed.

On the pitch, the Eagles boss was able to reflect on a pleasing afternoon where his team returned to winning ways for the first time since December 6 after recent defeats to Liverpool and Aston Villa.

Jeffrey Schlupp set them on their way with a fourth-minute opener but he was forced off in the 40th minute with a hamstring injury.

Ebere Eze replaced the winger and produced a moment of magic in the sixth minute of first-half stoppage time when he dribbled from inside his own half past two players before he sumptuously curled into the bottom corner from 20 yards.

“I have seen some very good goals recently but they have been against us so that has been the problem,” Hodgson added.

“It was nice to see one for us for a change because a lot of the goals we have conceded, in particular against West Ham and Liverpool, were incredible finishes.”

Defeat for the Blades means they have set another record – the longest winless start to a Premier League season, beating QPR’s 16-game run at the start of the 2012-13 campaign.

While boss Chris Wilder conceded he was clutching at straws, he was left frustrated by Eze’s goal given only five minutes of stoppage time was added on at the end of the first 45.

“I am listening to the fourth official counting down when the ball was on the far side, counting down from 20 to 10 and that’s it,” the Blades manager said.

“For me he [Stuart Attwell] was never going to blow the whistle when the boy picked it up. They never do and I am clutching a little bit as you can imagine.

“Even at the end when we had a corner, it was up but he wanted the corner to be taken.

“I don’t understand it but it was our naivety and our poor play in terms of not stopping that goal and a mountain to climb after that.”