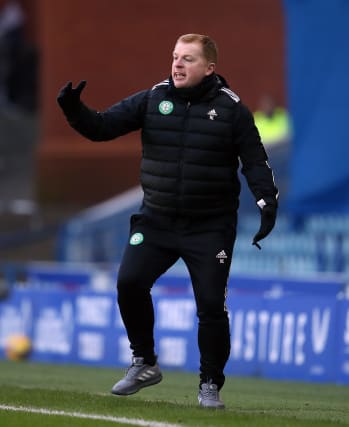 Neil Lennon refused to concede the Scottish Premiership title after Celtic’s 1-0 defeat by Rangers left them 19 points behind their Old Firm rivals.

The champions dominated the first half and were thwarted by Gers keeper Allan McGregor before the match turned in the 63rd minute when Hoops defender Nir Bitton was sent off by referee Bobby Madden for grabbing Gers striker Alfredo Morelos.

Celtic’s stand-in skipper Callum McGregor put the ball into his own net from a corner just seven minutes later to leave the Light Blues 19 points clear, albeit having played three games more than the champions, who are aiming for their 10th successive Premiership title.

Parkhead boss Lennon admitted his side now have “a lot to do” but insisted they would keep going.

He said: “It’s a sore one because we were the dominant team. We played brilliantly and I didn’t think it was a red card.

“That obviously gave Rangers a bit of encouragement and they got lucky with the goal, obviously.

“I don’t think they had an attempt on target, so that suggests how well we played, even with 10 men.

“We are bitterly disappointed not to come away with something. I thought we deserved a lot more.

“We have a lot to do now. We came here to win and we played that way, so we are disappointed with the decision and the result but not the performance.

“It’s funny, you dominate the game so much. We looked assured, quick, strong. We were by far the dominant team then come away with nothing.

“That happens in football sometimes. I don’t think we got what we deserved today.

“You have got to keep going. You can’t just say it’s over, because there is still a lot of football to be played.

“We have to be a lot more consistent in the second half of the season than we have been in the first half.

“It may be a pivotal moment in the season, I can’t predict what is going to happen in the second half, but we have to keep playing like that, keep being consistent, keep winning games and apply as much pressure as we possibly can.”

Lennon did not speak to Madden about the red card after the game but was unhappy with the decision and its impact.

He said: “Morelos might have got a shot off but it would have been from a very narrow angle.

“It’s not even in the box. I thought he was too quick to get the red out.

“It’s poor from Nir, but it’s not a red card and that changed the course of the game. We had been in full control.

“We made them look laborious at times and we were well on top. Allan McGregor got man of the match which speaks volumes for our performance.

“There is no doubt the sending-off had a huge impact on the game. We had to change our shape, change personnel, which we didn’t want to do. We had felt the longer the game went on we would win the game, not lose it.”