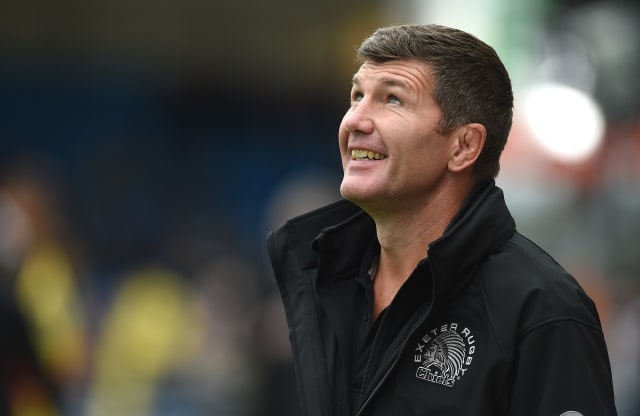 Rob Baxter welcomes Exeter’s toughest test of the season to date knowing that Wasps will be motivated by revenge in Saturday’s heavyweight showdown at the Ricoh Arena.

The rematch of the 2020 Gallagher Premiership final sees Baxter’s double winners look to improve on a poor record at the home of their rivals, where they have won only once since 2015.

Their most recent visit to Coventry was also their last defeat, when a weakened team were dismantled 46-5 in October.

Of greater significance is the climax to last season, when Exeter were taken to the wire in a 19-13 victory at Twickenham that saw Wasps fail to capitalise on an attacking line-out in the closing stages.

“Wasps are enjoying how they play and are playing with a lot of energy. No one appreciates more than me how tough it is to go there and get a win,” Chiefs director of rugby Baxter said.

“They’ve got a confidence about them and there will be an element of wanting to get their own back after the final, to prove a point there.

“We’ll have to have more energy than we did against Gloucester last weekend because it will be a tough and fast-paced game. But this is something we need – a tough, challenging game away from home.

“This should be the type of thing that gets us ready for our return to Europe in a couple of weeks.”

Wasps’ build-up to the final was affected by an outbreak of coronavirus that severely restricted their training, while the treacherous conditions prevented them from playing the all-action style of rugby that had swept them into the final.

“What a great challenge – to take on the European and Premiership champions. That’s something we’re excited about,” head coach Lee Blackett said.

“We went into that game at Twickenham with a way of beating them, but then we got there and there was horizontal rain lashing down.

“We’ve got a plan and it’s a very similar plan to what we were going to use in the final until the conditions changed our plan on the day. Hopefully we’ll get better conditions on Saturday.”

Wasps entered the final without 11 squad players who had been sidelined by Covid-19 and contact tracing, yet they fought Exeter to a standstill.

With the clock ticking down, they lost a five-metre line-out on their own throw that would have provided the platform to engineer a stunning upset.

“Everything we went through that week and where we got to in terms of being five metres out with a couple of minutes to go, makes me ridiculously proud of the effort.

“We had one training session going into that game and got ourselves in a position to win.

“That week and a half leading up to the final was brutal. I don’t think I averaged an hour’s sleep a night.

“Games at the top are won by little things and it’s about taking your opportunities. We had that opportunity but didn’t manage to take it.

“Yes there’s disappointment but it’s not something we look back at with sadness. We’ll be proud at getting ourselves there and yes there’s a fraction of regret, but for me it’s well and truly over.”

In Saturday’s other fixture, Gloucester will look to claim their second win in five outings when they host Sale at Kingsholm.