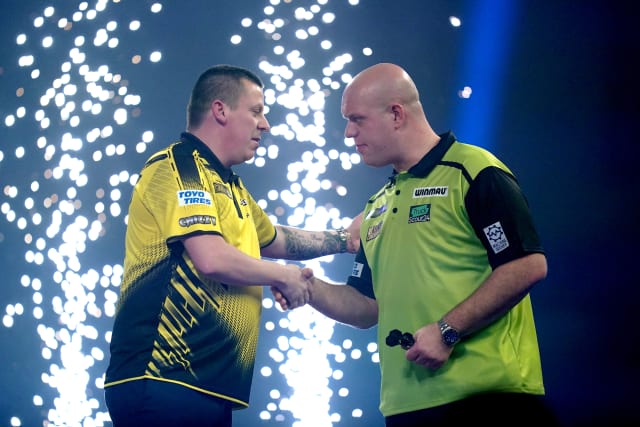 Dave Chisnall sent Michael Van Gerwen crashing out of the PDC World Championship with a shock 5-0 victory over the world number one in Friday’s quarter-finals.

A superb display from Chisnall at Alexandra Palace saw him average 107.34 and hit 14 180s as he whitewashed three-time champion Van Gerwen and moved into the semi-finals of the competition for the first time.

Chisnall’s last-four opponent will be two-time winner Gary Anderson, while the other semi-final will be between Gerwyn Price and Stephen Bunting.

The emphatic win by world number eight Chisnall – who almost registered a nine-dart leg, only missing a double 12 – ended a run of 27 matches without a victory over Van Gerwen.

The 40-year-old Englishman told Sky Sports: “I’m so proud. I’ve been practising well, I’ve been playing well I’d say for the last three, four weeks. I have put the effort in. I changed my points to a little bit smaller.

“I want it (the world title) more than anybody else does. I know my own ability, I know I’m playing well. I can win this.”

He added on Twitter: “I didn’t show up at all this evening and let myself down. For some reason it just never happened up there.

“Full credit to @ChizzyChisnall who was outstanding all game, and wish him luck for the rest of the tournament. Thank you for the support.”

“The 140s are coming good now. Still a few mistakes, but happy.”

He added: “If I wasn’t to win this title I’d love to see Chizzy (Chisnall) win it. He’s been on the go for years and he is a phenomenal darts player.”

And Bunting secured a maiden last-four appearance via a 5-3 win against Krzysztof Ratajski.