What deals could be done in the Premier League’s January transfer window? 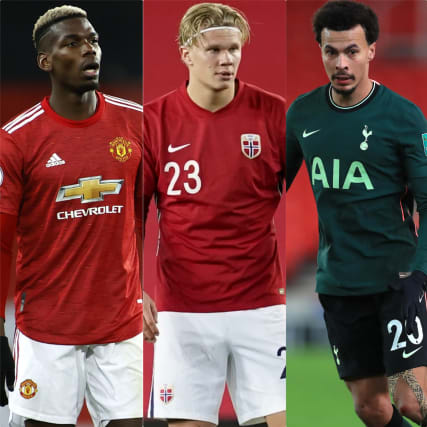 The transfer window is set to reopen on January 2 and Premier League clubs will be looking to bolster their squads in this most unpredictable of seasons.

Here, the PA news agency takes a look at the areas clubs will be looking to strengthen and what deals could be done.

Back issues for the champions

Liverpool head into the new year as league leaders and favourites to win a second successive title.

But their trophy defence has not been without complications due to long-term injuries to defensive duo Virgil Van Dijk and Joe Gomez.

Joel Matip is also injury-prone and Reds boss Jurgen Klopp has had to drop Fabinho back from midfield, while handing opportunities to inexperienced pair Nathaniel Phillips and Rhys Williams.

Klopp has a history of waiting for the right player. But further injuries could force his hand with Ajax’s Perr Schuurs, a former Anfield trialist, RB Leipzig’s Dayot Upamecano and Brighton’s highly rated Ben White among those linked with the Merseyside club.

Pogba on his way?

Manchester United manager Ole Gunnar Solskjaer could also do with defensive reinforcements given familiar fragility and fitness concerns at the back.

Victor Lindelof has a persistent back injury, Eric Bailly struggles to put a consistent run of games together and Aaron Wan-Bissaka has little competition at right-back.

All of which will probably go unnoticed as January transfer talk at Old Trafford will mostly focus on whether France midfielder Paul Pogba stays or goes.

The World Cup winner’s likely exit is to be in the summer, as will renewed United interest in Borussia Dortmund’s England winger Jadon Sancho.

Arsenal boss Mikel Arteta felt the icy chill of winter as the Gunners spiralled down the Premier League table before Christmas.

But could the Spaniard welcome sunnier days thanks to the light provided by the transfer window?

After all, just one January signing can inspire new hope and turn around a club’s fortunes. Just look at the impact of Bruno Fernandes on Manchester United since his arrival 12 months ago.

Arsenal are short on leaders and former Chelsea striker Diego Costa, whose Atletico Madrid contract has been terminated by mutual consent, would certainly bring that as well as aggression.

There is genuine Gunners interest in Real Madrid playmaker Isco, while resolving the future of Mesut Ozil would do everyone a favour at the Emirates.

Everton, Leicester and Aston Villa – yes, Aston Villa – will all be dreaming of a top-four spot and Champions League riches when Auld Lang Syne gets an airing around the country.

Carlo Ancelotti has overseen a remarkable turnaround in 12 months at Everton and growing ambition has seen them linked to Isco and out-of-favour Tottenham midfielder Dele Alli.

Finishing in the top four might be fanciful talk for Villa, but just being linked with Inter Milan’s Uruguay midfielder Matias Vecino shows how far the club has come under Dean Smith.

Expect Sam Allardyce to attack the transfer window at West Brom from day one.

‘Big Sam’ knows he needs goals to save the Baggies from the drop and two of his former players, Cenk Tosun at Everton and Newcastle’s Andy Carroll, have both been linked.

West Brom’s local rivals Wolves will also be in the market for a striker with no time frame on Raul Jimenez’s return from a fractured skull.

Ending Luka Jovic’s unhappy spell at Real Madrid could be one option, as rookie forward Fabio Silva gets to up to speed with the demands of the Premier League.

City in for big-name striker?

How much more can Sergio Aguero give to Manchester City?

That will be the question racing through Pep Guardiola’s mind as he attempts to close the gap on Liverpool.

City’s record goalscorer has been plagued by injuries and turns 33 in June, so it is no surprise Borussia Dortmund goal machine Erling Haaland is on Guardiola’s radar.

With Lionel Messi also admitting he does not know whether he will stay at Barcelona, the idea of the six-time Ballon d’Or winner playing in the Premier League remains a tantalising prospect.

Tottenham head coach Jose Mourinho has identified defence and midfield as the departments which need strengthening in January.

Chelsea recruited heavily in the summer but Haaland and West Ham midfielder Declan Rice remain targets, even if the Blues might well have to wait until the summer to push the boat out for that pair.

The Hammers are under no pressure to sell Rice and David Moyes could target Danish defender Frederik Alves Ibsen and Sheffield United winger John Lundstram, who has turned down a new contract at Bramall Lane.

Crystal Palace need to spruce up their attack and are keen on Reading’s Michael Olise and QPR’s Bright Osayi-Samuel. Fulham boss Scott Parker is hoping to clear the decks – Stefan Johansen, Kevin McDonald, Jean Michel-Seri and Maxime Le Marchand are surplus to requirements – to bring in a few loan signings.

Leeds appear to be aiming high with fresh interest in Manchester United’s Wales winger Daniel James, whom they almost signed from Swansea on transfer deadline day in January 2019.

Liverpool striker Divock Origi and Udinese’s Argentinian midfielder Rodrigo De Paul have also been linked and would be exciting additions to Marcelo Bielsa’s energetic side.

Newcastle might keep their powder dry in January as the likes of Christian Atsu and Rolando Aarons must be moved on to make room in their squad.

But left-back Brandon Williams, who has struggled for game time at Manchester United, is a loan target, while a new move for Arsenal defender Rob Holding cannot be ruled out.

Southampton are also interested in Williams as Ralph Hasenhuttl scours the loan market to add defensive, midfield and attacking numbers.

Brighton boss Graham Potter, who could do with a centre-forward and has been linked with Crawley hot-shot Max Watters, knows the big boys are circling for his top players.

Defender Ben White and midfielder Yves Bissouma have both alerted the interest of Liverpool and Manchester United, while speedy full-back Tariq Lamptey also has plenty of admirers both at home and abroad.

Burnley’s small squad is in desperate need of reinforcements and Sean Dyche will hope to be backed in the transfer market by new owners ALK Capital, whose takeover of the club was announced early on Thursday morning.