The biggest events for Scottish sport in 2021 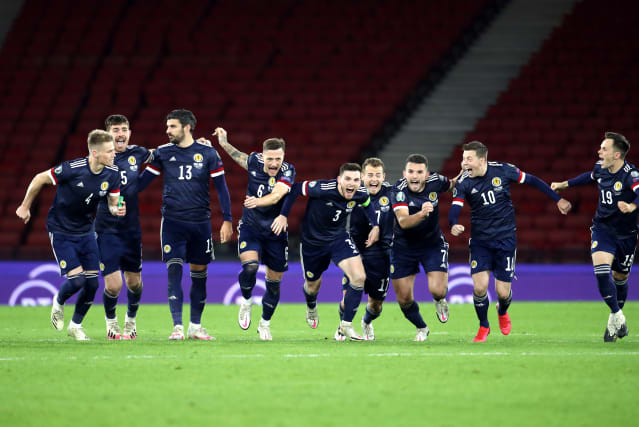 The year 2020 will be remembered for all the wrong reasons in the wake of the havoc wreaked across the globe by Covid-19.

However, as a new year dawns there is plenty to look forward to, not least for Scottish sport.

Here, the PA news agency takes a look at five big events to keep an eye out for over the next 12 months.

After two decades of hope and hurt, expectation followed by deflation, Steve Clarke’s team finally delivered the golden ticket the nation had been longing for as they edged past Serbia on penalties to seal qualification for Euro 2020. Scotland will line-up at their first major tournament since 1998 when Hampden plays host to clashes against the Czech Republic and Croatia – while there is a tantalising trip to Wembley for the Tartan Army to look forward to in between. Let’s just hope after all this time, Scotland serve up something that makes the wait worthwhile.

Thirty-two years have now passed since Liz McColgan and Yvonne Murray became Scotland’s last individual track athletes to climb onto an Olympic podium. However, there is growing belief that Laura Muir and Jemma Reekie are ready to equal that feat last achieved at the Seoul Games of 1988. Muir could only finish seventh in the 1500m final in 2016 – yet she ran the fastest 1500m time clocked anywhere in the world during 2020. Reekie, meanwhile, only lost one 800m race last year and also recorded the world’s quickest time indoors. If both women can maintain those levels they should be in with a chance of a medal when they head to Tokyo in July.

Rangers marching on in Europe

It is only three-and-a-half years since former Rangers boss Pedro Caixinha found himself standing in the middle of a bush trying to placate irate supporters after his team had been humbled by the not-so-mighty Progres Niederkorn of Luxembourg. But in the time since, new boss Steven Gerrard has made huge strides in restoring the club’s European reputation to its former standing. He successfully steered his new-look side to the Europa League group stages for the first time in eight years just weeks after taking over. They made it as far as the last 16 in his second campaign while his third could barely have gone any better so far, with only two late slip-ups against Benfica denying the unbeaten Light Blues a perfect six wins out of six in the group. Royal Antwerp are next up in the last 32 but Gerrard has already made clear he is targeting the quarter-finals at least.

Boxer Josh Taylor has ridden an express elevator to the top of the light-welterweight division, claiming both the WBA and IBF world titles inside 16 fights. The explosive Prestonpans puncher is now on a collision course with American Jose Ramirez, holder of the WBO and WBC straps, as they get set for a winner-takes-all unification bout. A date has yet to be set for the fight but the path has been cleared after WBO mandatory challenger Jack Catterall opted to step aside and allow his fellow Brit Taylor to go for glory. Promoter Bob Arum believes a date can be set for the first three months of the new year, with the only debate yet to be settled is on which side of the Atlantic the fight takes place.

New name set to be etched on Betfred Cup

For the last four seasons, Celtic have held Scotland’s three domestic trophies in an iron grip, winning 12 on the spin. But with Neil Lennon’s team on the fade this term, the Hoops’ stranglehold on silverware has slipped and it will be between Hibernian, Livingston, St Johnstone and St Mirren to battle it out at Hampden for the first major honour of the campaign. Hibs were the last team before Celtic to lift a cup with their 2016 Scottish Cup win and Jack Ross’ men will be looking to grab another as they take on a struggling St Johnstone side in their January semi-final. St Mirren caused the shock of the competition so far when they dumped out a previously unbeaten Rangers but the Buddies face a Livi team hitting form under new boss David Martindale and both will fancy their chances of reaching the final on February 28.