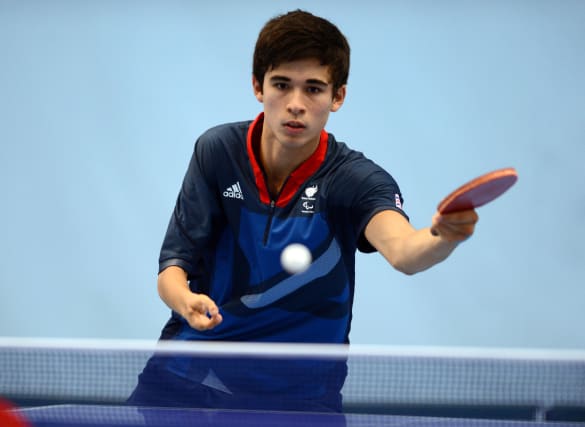 The dawning of a belated Olympic and Paralympic year can provide renewed hope in a world stricken by coronavirus, and act as a powerful symbol of sport’s enduring force for good.

This is not the PR-smoothed spin of a preening bureaucrat, but the heartfelt opinion of a heroic Paralympic table tennis player who embodies the Olympic ideal.

Kim Daybell spent 2020 at the sharp end of the coronavirus fight as a junior doctor at the Whittington Hospital in north London, working shifts so long and strength-sapping they often left him too fatigued to queue for food.

Nevertheless Daybell, a two-time Paralympian and winner of a silver medal at the 2018 Commonwealth Games, sustained himself with the hope and belief that one day the delayed Games would act as a timely celebration of victory against the virus.

“For me personally it would be an amazing way to draw a line under this whole episode,” Daybell told the PA news agency.

“I think it’s making us see how much sport really means to people, and hopefully in 2021 the Olympics and Paralympics could be a really great event where nations come together again after a whole year in which the whole point has been to be isolated and separated from each other.

“I think to be able to have a global multi-sport event for everyone to watch and appreciate would give a lot of people hope. If they see that kind of thing going ahead, it could be a real symbol of the world moving forward.”

Daybell’s words will act as a timely counter to those who question the purpose of pressing ahead with a Games which is sure to be shorn of much of its usual excitement by inevitable coronavirus restrictions in the Japanese capital.

Nevertheless, the 28-year-old is the first to appreciate that the battle is far from won, with surging rates in December forcing him to return to the frontline having been temporarily redeployed in a GP practice.

Daybell, who studied for a degree in medicine at Leeds University and subsequently managed to balance his duties as a junior doctor with his burgeoning sporting career before the virus struck, taking a year out to focus on the Rio Paralympics, added: “Things are getting a lot busier now.

“The impression I’m getting working shifts in the hospital is that we’re now more well-prepared in terms of how we’re planning things and what action needs to be taken, but it’s probably at its worst now than in the peak back in the summer.

“I think one thing that’s harder this time round is the general fatigue amongst the hospital staff in general. We’ve been through a tough year and it’s just knackered everyone.

“I’ve had some really low moments this year, but never to the point where I wanted to throw in the towel. From a medical point of view this is why you are in the profession, for moments like this when you can step up.”

Daybell’s opportunities for table tennis training have proved few and far between, although he has managed to return to the national training centre in Sheffield depending on lockdown regulations, and says he never considered giving up his ambition of returning to the Games.

He is close friends with Will Bayley, the reigning Paralympic champion who has overcome his own battles with illness and injury to put himself on track to defend his title in Japan.

“It has been great to touch base with the coaches and people I’ve known and trained with for over 10 years,” added Daybell.

“Throughout this year, it’s just reinforced how much table tennis helps me and gives me the release from the serious things that are going on, and gives me the physical outlet that I really enjoy.”

Many of Daybell’s fellow Paralympians will be feeling understandably nervous about the prospect of the Games in Tokyo, in particular those who would potentially be immuno-compromised if exposed to the virus.

And Daybell, who was born with Poland’s Syndrome, which means he has an under-developed chest muscle on one side of his body, has willingly acted as a counsellor to friends and team-mates who must face the difficult decision of whether to break isolation in order to achieve a place in Tokyo.

“I think a lot of the players look to me as a source of information and if I can offer some reassurance I will give them that,” Daybell added.

“A lot of them will be very nervous going into a big multi-sport event having been isolated from so many people for so long.

“I’ll tell them straight and if I don’t think it’s safe I would say so. But we’ve got to trust in the International Paralympic Committee and the IOC that if these Games go ahead it’s because they feel that they can.

“I think overall this Games is not going to necessarily be about the winners. I think it’s just about everyone being there and the remarkable stories that will have happened for each person to get to that point to be competing.

“Just for the Games to go ahead is the most important thing, as the symbol of hope for the future.”