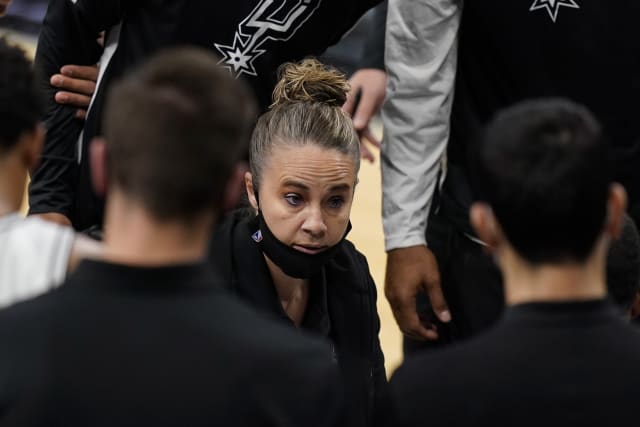 Becky Hammon made history on Wednesday night by becoming the first woman to officially coach an NBA team during the regular season.

Hammon, 43, took over from Gregg Popovich after the San Antonio Spurs head coach was ejected in the second quarter of a 121-107 defeat to the Los Angeles Lakers.

Assistant coach Hammon could not stop her side from defeat as LeBron James celebrated his 36th birthday by scoring 26 points – the 1,000th consecutive game he has hit double figures.

The Lakers raced into a 92-74 lead and although San Antonio cut the deficit to eight points in the final minutes, James and Anthony Davis were both on target to close out the win.

“It is a big deal and a substantial moment,” Hammon said in a video posted on the WNBA Twitter feed.

“In the moment, I was just trying to win the game. I try not to think about the huge picture and the huge aspect of it, because it can get overwhelming.

“It is my job to be focused for those guys and be sure and I am helping them do the things that will help us win.”

Kawhi Leonard inspired the Los Angeles Clippers to a 128-105 victory over the Portland Trail Blazers on his return to the line-up.

Leonard, who was wearing a mask after missing two games with a mouth laceration, bagged seven assists and three steals. Paul George added 23 points in a comprehensive win for the home side.

Kevin Durant starred for the Brooklyn Nets in a 145-141 home triumph over the Atlanta Hawks.

Durant shot 11 of 22 from the floor, while scoring all nine of his free throws as he registered 33 points. Kyrie Irving helped the hosts over the line by adding 17 of his 25 points in the final quarter.

The Dallas Mavericks were brought crashing back down to earth following defeat against the Charlotte Hornets.

Just days after their 124-73 win over the Los Angeles Clippers, the Mavericks were on the wrong end of a 118-99 score as first-round draft pick LaMelo Ball hit 22 points.

Miles Bridges added 20 points, as well as a career-best 16 rebounds, while Terry Rozier also contributed 18 points to send the Hornets to a win for the first time in two away matches this term.

The Miami Heat bounced back from defeat over the Milwaukee Bucks to register a 119-108 victory.

The Bucks secured a 144-97 win on Tuesday, but Heat reserve Goran Dragic scored 26 points as his side responded with a straightforward win in the rematch.

Finally, Jaylen Brown racked up a career-high 42 points as the Boston Celtics sealed a 126-107 victory over the Memphis Grizzlies.

Boston headed into the final quarter with a comfortable 96-71 lead, allowing Brown to sit out the fourth.

Jayson Tatum scored 16 points and Marcus Smart made four three-pointers as the Celtics secured their 10th win in succession against the Grizzlies.