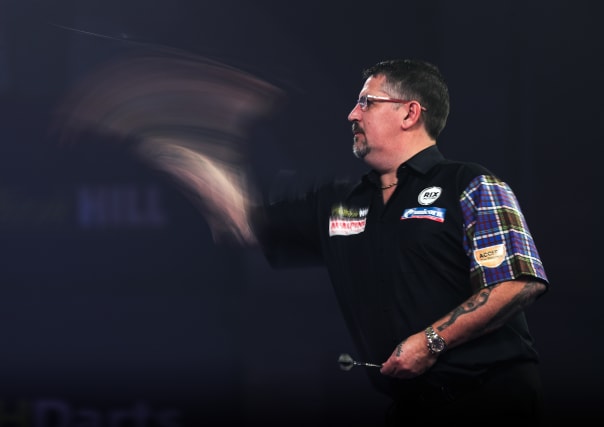 Two-time champion Gary Anderson roared into the last eight of the PDC World Championship and then took aim at commentator Wayne Mardle.

The 50-year-old also ruled out any talk of retiring while once again playing down his chances of a third title despite a 4-0 whitewash of Devon Petersen.

South African Petersen had a glimmer of hope with a dart at double 16 to take the third set.

But he missed to allow Anderson in to take out 74 with two darts en route to a ninth Alexandra Palace quarter-final.

Afterwards the Scot, who was fuming at Mensur Suljovic’s slow pace in the previous round, gave former pro Mardle both barrels.

“Wayne Mardle’s comment the other night, ‘if you’re playing a player and you need to put him off, slow him down’, that’s coming from a commentator on Sky,” Anderson said at his press conference.

“My way of playing darts is you go there to try to outscore him, to outplay him, to out-finish him.

“Now Wayne’s telling everyone if you’ve got a problem with a player slow him down, or do what you can to put him off. What a numpty!

“That’s great for television, and great to tell kids what to do, isn’t it? Proud of you Wayne.”

Earlier, Anderson had told Sky Sports: “I’m nowhere near where I should be playing but next year I’ll start from scratch and get myself back to it. This run is a real bonus for me.

“I heard Rod Harrington say I should retire. I was thinking about it, but not now! You’ve got me for a long time, I’m here for the duration, whether it’s two years, three years of 10 years, I’ll be here.”

Premier League champion Durrant led 2-0 and 3-1 but Dutchman Van Duijvenbode pegged him back and sealed a dramatic 4-3 win on double six.