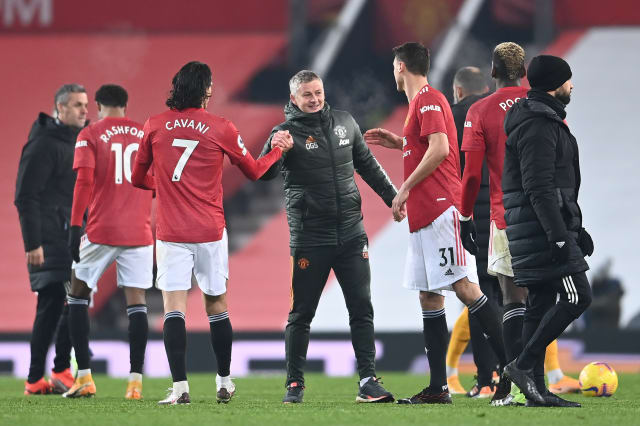 Ole Gunnar Solskjaer was coy about Manchester United’s title hopes after Marcus Rashford’s last-gasp effort against Wolves propelled them up to second in the Premier League.

A topsy-turvy year that started with supporters calling for the heads of executive vice-chairman Ed Woodward and the Glazer family ended with the Red Devils winning at an empty Old Trafford to move just two points behind leaders Liverpool.

United’s mentality has been key to their improvements during 2020, with Solskjaer’s men digging deep on Tuesday to seal a 1-0 win against Wolves through Rashford’s deflected late strike.

Asked at what point he and the players acknowledge they are in a title race, the United boss said: “There’s no title race after 15 games.

“You can lose the chance of being in a race in the first 10 games, of course you can.

“But play another 15, get to 30 and then maybe we can start talking about a title race, when you get to March or April, when we have at least played more than half a season.

“But the belief is there. Of course the players go into every game thinking we can win against anyone anywhere.

“Away we’ve shown what we’re capable of. I think we’re improving at home as well and this result is massive for confidence and for the attitude.”

While United’s play was ponderous at times on Tuesday, Solskjaer was proud of his players’ desire “to create that little bit of luck” before eventually ending the year on a high.

“You get that by personalities, by recruitment,” he said of the group’s improving mentality.

“Of course we’ve added that spark I think but also when you get results, and things are going your way, that helps.

“We brought it up early on in pre-season that we need to add more points towards the end of games. That’s something we do as a club – we’ve done that so many times and we’ve done that quite a few times this season as well.

“Physically we last games more. I have to say I feel a bit for Wolverhampton, they have had one recovery day, which I don’t think is right for any player or any team to only have one day between games.

“We were the lucky ones with the early kick-off at Leicester in this respect. Of course we had less recovery before the Leicester game.

“But I think the players deserve at least two days in between and I think it showed towards the end.”

United return to action against Aston Villa on New Year’s Day, while injury-hit Wolves kick off 2021 at Brighton the following day.

Nuno Espirito Santo was understandably gutted by the late gut punch on Tuesday evening, saying “it was tough to take.

The Wolves boss said: “We are experienced to know that sometimes it’s the other way around. We take this and move forwards.

“(The young players) did well. I think they did well. Situations happen. It’s up to us to decide the right moments to play them and the answer was good.

“I think today was a game that everybody should learn from, especially the young boys. It’s nothing that they have to worry about – I think they did really, really well.

“But the game teaches that you have to be focused until the last moment. It’s a tough lesson to take but it’s a good one.”