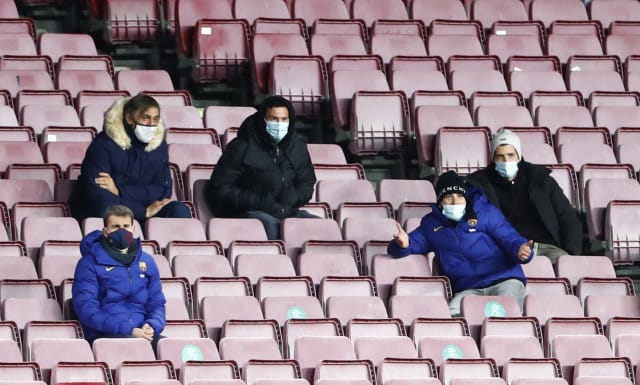 Barcelona laboured to a 1-1 draw with relegation-battling Eibar as the in-demand Lionel Messi watched on from the stands.

Barca needed a 67th-minute equaliser from Ousmane Dembele to take a point from a side hovering just above LaLiga’s drop zone after Kike Garcia embarrassed Ronald Araujo to open the scoring just before the hour mark.

Dembele, a half-time substitute, was the star of the show from a Barcelona perspective, setting up a string of chances for his team-mates and coming close to adding a late winner, but it was not enough as their frustrating season suffered another setback.

The display was unlikely to have impressed the watching Messi, just back from an extended break in Argentina and not involved due to an ankle injury, as speculation over his next move ramps up with the 33-year-old moving into the final months of his contract.

Barca had a penalty inside five minutes after Araujo drew a foul from Pedro Bigas but they could not take advantage as Martin Braithwaite wasted the opportunity, firing wide of the left upright.

Eibar took encouragement from the let-off, enjoying a strong spell as they created opportunities for Takashi Inui, Garcia and Edu in between a string of corners.

Barca did not reemerge as an attacking force until midway through the half, with Araujo’s header forcing a decent save from Marko Dmitrovic.

Braithwaite had the ball in the net in the 25th minute but his effort was ruled out for offside.

Ronald Koeman sent on Dembele to replace defender Sergino Dest at the break and it appeared to be working as he had two chances either side of creating openings for Miralem Pjanic and Antoine Griezmann.

But just as the game seemed to be tilting Barca’s way, Garcia robbed Araujo of the ball on the halfway line and ran at goal to fire beyond Marc-Andre ter Stegen.

Koeman responded with two more changes as he sent on Philippe Coutinho and Trincao, and 10 minutes later Barca were level. A neat move on the left freed Junior Firpo to send over a low cross and Dembele had all the space he could want to fire back across the face of goal.

The game was set up for a Barcelona winner as Dembele continued to pull the strings, but Clement Lenglet headed over before Braithwaite fired wide and they could not take any of their late chances.