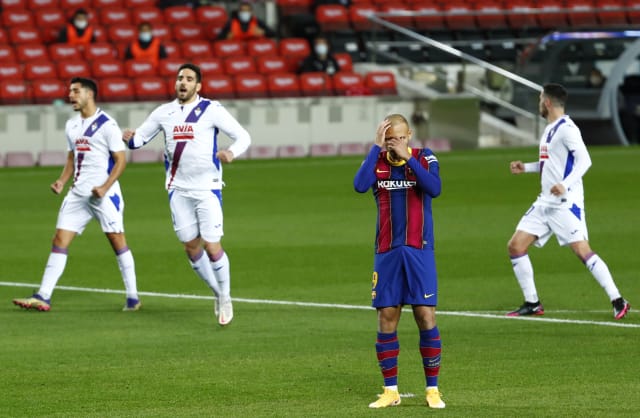 Barcelona’s frustrations continued as they laboured to a 1-1 draw with relegation-battling Eibar at the Nou Camp.

Lionel Messi, sidelined by an ankle injury and the subject of increasing transfer speculation, watched on from the stands as Barca needed an equaliser from substitute Ousmane Dembele to earn a point.

After Martin Braithwaite missed an early penalty, Barca spurned a string of chances and then fell behind just before the hour mark.

Kike Garcia robbed Ronald Araujo of possession on the halfway line and raced through on goal to fire the visitors in front.

Dembele had replaced defender Sergino Dest at half-time in an attacking move, and Ronald Koeman made further changes after falling behind which had the desired effect.

Dembele was involved in virtually every Barca attack in the second half, and got his reward in the 67th minute as he fired in from Junior Firpo’s cross.

The draw leaves Barcelona sixth in LaLiga, a point behind Sevilla who moved up to fourth with a 2-0 win over Villarreal.

Lucas Ocampos put Sevilla ahead from the penalty spot eight minutes in after Juan Foyth was deemed guilty of a handball in the area.

Youssef En-Nesyri then made sure of the points eight minutes into the second half.

Levante survived a late fightback to beat Real Betis 4-3 in a game high on drama.

Though Oscar Duarte’s early opener was cancelled out by Aissa Mandi with 12 minutes gone, Levante were cruising after Jose Luis Morales scored twice in three minutes midway through the first half.

Roger Marti then added a fourth 10 minutes into the second half, but a red card for Rober with 22 minutes left offered the visitors hope.

Sergio Canales pulled one back from the penalty spot 10 minutes later after a Duarte handball, and Canales then scored his second with four minutes left to set up a dramatic finale.

Cadiz and Real Valladolid shared the spoils from a goalless draw.