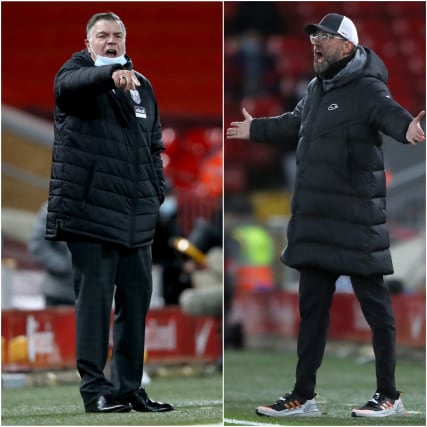 Liverpool dropped points at home for only the third time in two years as West Brom drew 1-1 at Anfield on Sunday.

Here, the PA news agency looks at the result in light of recent trends.

Since the start of January 2019, Liverpool’s home record in the Premier League reads played 36, won 33, drawn three, lost none.

The Baggies joined Leicester and Burnley as the only visiting teams to avoid defeat in that time.

Liverpool, looking to capitalise on title rivals Manchester City’s defeat to Newcastle the previous day, flew out of the blocks as Sadio Mane gave them the lead with barely more than two minutes on the clock. But Harry Maguire equalised in first-half stoppage time and though the result took Liverpool five points clear, City went on to triumph in a dramatic title race.

Klopp’s quest for a 100 per cent record at home in the Premier League fell at the penultimate hurdle despite Andy Robertson’s brilliant headed opener. Nick Pope made a string of fine saves, Jay Rodriguez equalised in the second half and the Clarets even had a late chance to win it when Johann Berg Gudmundsson hit the crossbar.

Again Mane scored an early opener, this time in the 12th minute of a dominant first-half performance. Liverpool could not put the game to bed, though, and an improved second half from Allardyce’s side culminated in Semi Ajayi’s 82nd-minute header spinning in off the post.

Last loss at hands of Allardyce

The last Premier League visitors to win at Anfield were Allardyce’s Crystal Palace side on April 23, 2017.

Philippe Coutinho’s free-kick put Liverpool ahead midway through the first half but former Reds striker Christian Benteke levelled just before the break and headed a second-half winner.

Since then, however, Klopp’s men are unbeaten in 67 home league games, with 55 wins. Their 12 draws in that time include previous points for both Burnley, in September 2017, and West Brom three months later.

Unlike the overwhelming majority of Klopp’s Premier League contemporaries, Allardyce boasts a break-even record against him in the competition.

Benteke, then at Liverpool, gave Klopp victory in their first meeting in December 2015, when Allardyce was in charge of Sunderland – but the Black Cats came from 2-0 down with eight minutes to go to draw that season’s return fixture.

Palace’s win levelled the Allardyce-Klopp series and every league game since has been drawn – the two Merseyside derbies in Allardyce’s spell at Everton in 2017-18, plus Albion’s exploits on Sunday.

Klopp can claim a slight edge in their seven overall meetings after Liverpool beat Everton in the FA Cup in January 2018, Virgil Van Dijk with a late winner on his Reds debut.