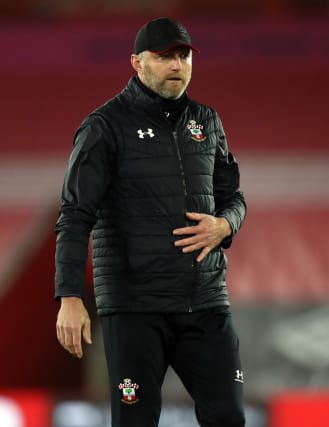 Southampton boss Ralph Hasenhuttl admits it has been tough to strike the right balance between training and protecting his squad’s fitness during a hectic festive schedule.

Saints were held to a goalless draw at Fulham on Boxing Day – stretching their winless run to three matches – and host West Ham just three days later as they look to rediscover the form which saw them briefly top the table during a seven-game unbeaten run.

Despite being fortunate with injuries during the first part of the season, the problems have started to pile up for Hasenhuttl.  While Oriol Romeu is due to return from suspension, three key players are expected to be ruled out against the Hammers through injury, and the manager acknowledges the difficulties he is facing.

“The injury of Jannik (Vestergaard), it was an old injury from the international game where he was a little bit stretching his leg and for this the knee was starting to make problems and it was getting worse and worse and he had to stop now,” the Saints boss said.

“You see it’s a lot of games for the players, we know this, especially now Christmas and they play three times a week and for us with the small squad that we have, very tough to find the balance of protecting them, letting them out and playing with them and we don’t have such a big squad.

“But yeah, it’s a strange year, it’s a very intense year and we must absolutely do everything so that we control the sessions in a lower level to keep the energy for the games at the weekend. This should be the key in the next weeks to come through this very intense time.”

Danny Ings is among those sidelined after sustaining an injury during the 1-0 defeat to Manchester City before Christmas, with Nathan Redmond and Vestergaard also expected to be missing.

Faced with the need to keep players as fit and fresh as possible, Hasenhuttl has been prioritising recovery over intense training.

“There was nearly no training, there’s more recovery than training sessions,” he said.

“I think the less we can train the more we can show them bits of videos of what we want to see and to learn with the mind and not so much the physical on the pitch.

“But this works and I think this week again, because we have definitely put the sub (substitute) players in a good shape and they could help us if necessary.”