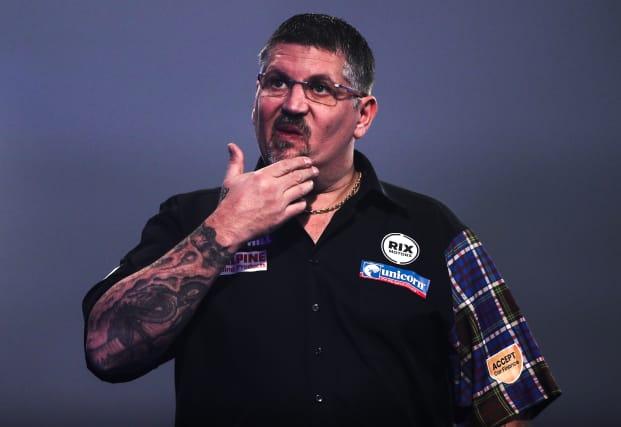 Anderson, world champion in 2015 and 2016, missed an astonishing 33 shots at doubles and admitted to being frustrated by Suljovic’s inconsistent pace of play at Alexandra Palace.

“Simple as that. If that’s how darts is going to be played I’m away for a game of golf. I’m not going through that again.

“I’m sure there are 90 per cent of folk watching at home, they probably turned over and watched Corrie or something – I would have done.”

Questioning Suljovic’s variable pace of play, Anderson added: “Was he slow in the last set or the third set? No, he wasn’t slow then.

“I just want to throw darts and if you get spanked, the boy’s been better than you. You shake his hand and then you go.

“But I didn’t enjoy that and I’m just sorry for the folk who watched it.”

Anderson – who saw Suljovic miss four darts to close out both the first and third sets before losing them – trailed 3-2 after losing six successive legs.

But the number 13 seed rattled off six legs of his own to finally overcome the Austrian and reach the last 16.

Price almost took victory in the sixth set, but the Welshman missed double top for a match-sealing 145 finish.

Dolan’s reprieve was short-lived as Price, who averaged 99.74, took the final set 3-2 to set up a last 16 date with Mervyn King.

Price said: “I was all over the shop. One minute I was playing really well, the next minute I couldn’t hit a barn door.

“I thought the luck was up against me, but I stuck in there until the end and I was thankful to see that last dart go in.

“You can’t just think you can turn up and win because anyone can win this tournament, but I never thought Brendan was going to play as well as he did. Thankfully I got over the line.”

England’s Glen Durrant, the number 12 seed, held on for a 4-2 victory over American Danny Baggish after racing in to a 3-0 lead.

Aspinall had boldly declared he would be crowned world champion after surviving four match darts before winning a sudden-death leg against Scott Waites before Christmas.

But he crashed out to his Dutch rival, despite levelling the match at 2-2 after losing the opening two sets.

King and Jose de Sousa both averaged more than 103 in a high-scoring affair.

Dirk Van Duijvenbode followed up his second round triumph over former world champion Rob Cross with a 4-0 win over Adam Hunt.