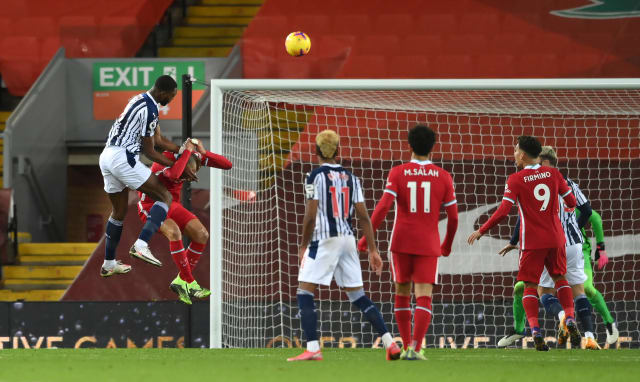 Ajayi headed home an 82nd-minute equaliser to claim a 1-1 draw at Anfield and make it four league games without defeat on the red half of Merseyside for Allardyce with Sunderland, Crystal Palace and Everton as well as the Baggies.

The Reds, who would have gone five points clear of the Toffees at the top with victory, took just 12 minutes to force their way in front when Sadio Mane controlled Joel Matip’s pass on his chest before volleying past keeper Sam Johnstone.

However, despite the early setback, the Baggies defended stubbornly thereafter and, having adopted a slightly more progressive approach after the restart, got their reward with eight minutes remaining when Ajayi climbed high above Fabinho to power home the equaliser off the inside of a post.

They still needed a fine late save by Johnstone to deny Roberto Firmino, but held firm to claim a hugely creditable point.

Romain Saiss snatched two precious points from Tottenham’s grasp as Wolves also left it until the death to emerge with a 1-1 draw.

Spurs got off to the perfect start when, with just 57 seconds on the clock, Tanguy Ndombele drilled a low shot past the unsighted Rui Patricio to give them a lead which they defended resolutely until the break.

Saiss headed a 48th-minute Pedro Neto corner straight at Hugo Lloris and the Frenchman had to save bravely at the feet of Fabio Silva on the hour, but he could not keep out Saiss’ glancing 86th-minute effort from another Neto corner.

Tomas Soucek snatched a second victory in 13 league games from Brighton’s grasp as West Ham twice came from behind to 2-2 draw.

Neal Maupay had given the visitors a deserved lead a minute before the break at the London Stadium, but Ben Johnson’s first senior goal for the Hammers levelled it up on the hour.

Defender Lewis Dunk got the benefit of a debatable call after a lengthy VAR check when he stabbed Brighton back in front after the ball had appeared to clip his arm as he challenged at the near post with 20 remaining, but Soucek ensured the spoils were shared when he bundled the ball home eight minutes from time.

Patrick Bamford’s 10th league goal of the season handed Leeds a hard-fought but controversial 1-0 win over Burnley at Elland Road.

The striker converted a fifth-minute penalty after being felled by keeper Nick Pope, but the home side were themselves fortunate not to concede a spot-kick when Pope’s opposite number Illan Meslier clattered into Ben Mee.

Ashley Barnes smashed the loose ball into the net, but referee Robert Jones had already blown for a foul, to the visitors’ astonishment penalising the defender to double the Clarets’ agony.

Burnley enjoyed the better of the second half but ultimately were unable to claw their way back into the game.