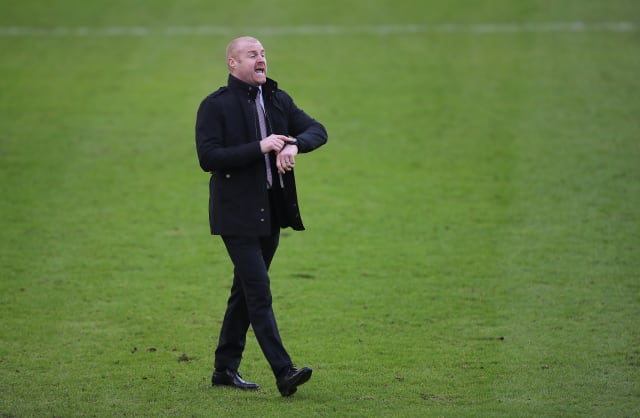 Sean Dyche was left “incredibly frustrated” after Burnley’s 1-0 defeat at Leeds, claiming key decisions went against his side.

Patrick Bamford’s fifth-minute penalty proved decisive after he was adjudged to have been fouled by Burnley goalkeeper Nick Pope.

Burnley were denied an equaliser in the 17th minute. Ashley Barnes turned the ball home, but referee Robert Jones had already blown for an alleged foul by Ben Mee on goalkeeper Illan Meslier.

Dyche, who had spoken to Jones after the match, said of the disallowed goal: “Ben Mee does nothing other than clearly attempt to win a header. He doesn’t even look at the man.

“The keeper comes out, knees him in the back, drops the ball and somehow that’s a foul on him and it’s an impossibility, even allowing for the protection of keepers.

“So I’m incredibly frustrated, and lots of other decisions, but they’re two very important decisions that have gone against us.”

Dyche did not think Leeds should have been awarded their early penalty, arguing that Pope had won the ball before colliding with Bamford.

“Popey got the ball,” Dyche said. “You can tell by the trajectory of the ball, so I’m amazed, no I’m not amazed, because at the very top of the game they’ve said they want more penalties.

“There is a directive, I understand that, but ironically we’ve only had one in 24 games, which is bizarre in itself.”

Leeds dominated the first half and missed a host of chances, but Burnley turned the tables on Marcelo Bielsa’s side in the second period as they pressed for an equaliser.

“They had a bright start – poor shape from us and they got in behind us,” Dyche added. “Second half we were terrific, out-ran them and out-performed them.

“Credit to them, they’ve been working hard to get a clean sheet. I’m certainly not not giving them credit.

“But we had so many chances to find the final key pass or finish (in the second half) and didn’t.”

Bielsa’s side moved seven points clear of Burnley, who remain in 16th place, but he admitted Leeds had been under the cosh after the interval.

“We hung on to the result,” he said. “In the final part of the second half and perhaps in the whole second half, it was the game that they were proposing they wanted to play.

“We weren’t able to stop them playing how they wanted, to neutralise them and although we defended fiercely, the opponent had chances to score.”

Leeds registered their sixth league win of the season and climbed four places up to 11th before Wolves’ evening kick-off against Tottenham.

Bielsa’s side are not renowned for backs-to-the-wall defending but their refusal to buckle under the late pressure clearly satisfied the Argentinian.

“It was an energetic and valiant effort by the guys and very decisive,” he added.