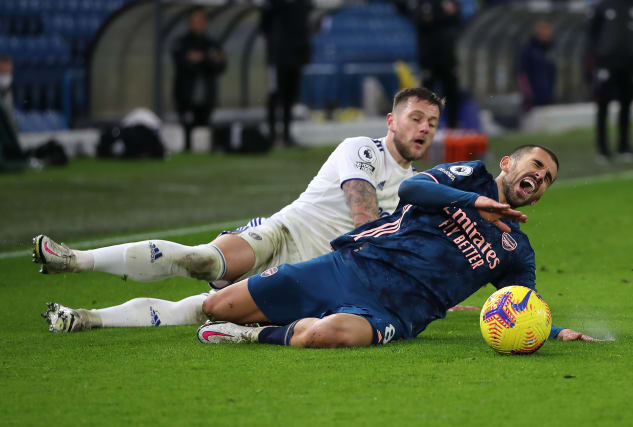 Diego Llorente faces a baptism of fire in the absence of skipper Liam Cooper when Leeds take on Burnley at Elland Road on Sunday.

Burnley boss Sean Dyche declared this week that his side will target Leeds’ vulnerability at set pieces and Cooper, ruled out due to an abdominal strain, could be sorely missed.

The Leeds captain has had his fair share of criticism during the club’s rise back to the Premier League, but boss Marcelo Bielsa has only expressed admiration for the former Chesterfield defender.

“Cooper has lost out the most in the aerial duels in these last 14 games,” Bielsa said when reviewing last week’s 6-2 defeat at Manchester United.

“It’s like this because he always defends against the best opposing header.

“In this game he scored and neutralised (Harry) Maguire, who is a very a good header of the ball. That’s the process I am looking for, to get closer to the best.”

The Scotland international was forced off at Old Trafford and joins fellow centre-half Robin Koch on the sidelines.

“When Cooper wasn’t on the field, Maguire missed two chances. Pascal (Struijk) marked him on both these and competed, but couldn’t win,” Bielsa added.

Koch will be out for three months after undergoing knee surgery recently and his absence places even more onus on Llorente, who is expected to partner right-back Luke Ayling in central defence.

Bielsa has no other new injury worries as his side face three fixtures in six days, which could have a huge bearing on their season.

Leeds sit 14th in the table, four points and two places above Burnley, and play at second-from-bottom West Brom on Tuesday before next weekend’s game at Tottenham.

Bielsa responded to criticism of his all-out offensive tactics after his side’s heavy defeat at Old Trafford by claiming English football would suffer if the emphasis was placed on defence.

“I feel it was less humiliating to lose 6-3 or 6-4 rather than 6-2,” he added. “I will always gamble for the hurt to be a smaller one, even if there’s a risk of it getting bigger.

“This is why I say English football is one of the few altars where it is valued, in the attempt to be better, even if the opponent ends up being superior.

“Clearly, that (has) stopped being this way. The spectators have started thinking this way, which I think will affect English football.”