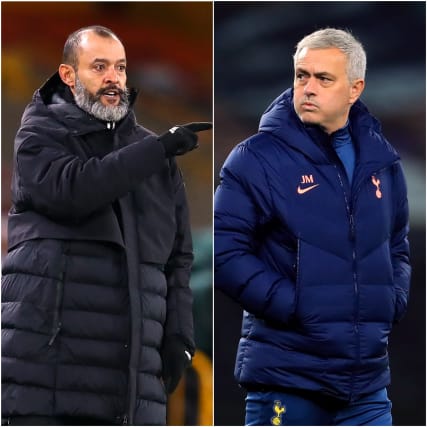 Tottenham boss Jose Mourinho says life is not about to get easier for his side in the Premier League when they visit Wolves on Sunday.

Spurs travel to Molineux having played Manchester City, Chelsea, Arsenal, Liverpool and Leicester over the last six games – a run that saw them take seven points and lose their position at the top of the table.

On paper, the next few games look more favourable as after the journey to mid-table Wolves, Mourinho’s side face Fulham and Leeds at home.

But the Portuguese does not see it that way.

“It is very hard in this league to have consistent runs because every game is very difficult,” he said.

“We were in a period where we had to play against the considered top six teams where we got them in a row and some people can say now we are going to get an easier run of matches.

“What is easier? Go to Wolves and play Fulham and Leeds? It’s not easier, this is a league where we are and we should be very happy with that and not sad with that.

“We should be happy because it is a fantastic league.”

Having challenged for Europe last season Wolves have struggled for consistency this season, having already lost six games.

But Mourinho, who used to manage Wolves boss Nuno Espirito Santo at Porto, is still a fan of his compatriot.

“You look to the table, how can you analyse managers with this table, it changes every week, every two matches.” he said. “In one week one team is in a certain position after two weeks they are in a completely different position.

“It is up and down so you cannot judge the work of a manager. Everybody is there.

“Nuno is a very good coach it doesn’t matter if Wolves are second, third, eighth or ninth.

“I think this is a question I answer for three years in a row, every time I play Wolves this question comes.

“You just need to copy and paste what I say. Very good coach, great work, the results are there. You know my answer he is a very good coach.”