Jim McLean: The fiery Scot who took Dundee United to the top 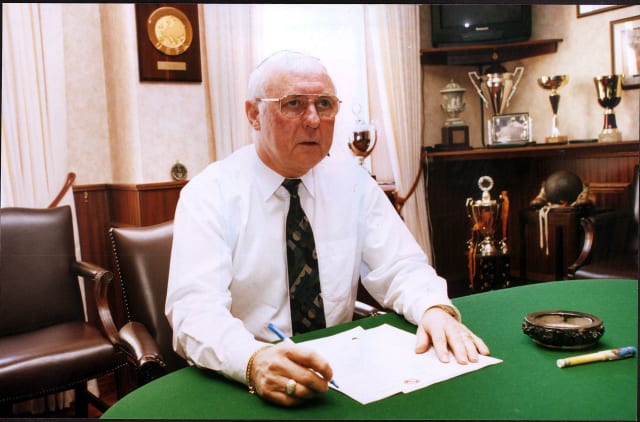 It is fair to say that Jim McLean’s bark was just as bad as his bite.

But it was that ferocious temper and a fierce determination to succeed which helped him transform Dundee United into a European force.

The former Tannadice boss, who has died at the age of 83, took charge of the Terrors in 1971 when they were still stuck in the shadow of neighbours Dundee.

But eventually he turned the Tangerines into a side capable not only of triumphing at home but also of toppling some of the biggest names abroad.

Born in Larkhall on April 21, 1939, McLean was raised by mother Annie and father Tom in a strict Christian household.

Like his brothers Willie and Tommy, he would go on to a career in football but the stringent rules imposed on the family by their membership of the Plymouth Brethren helped shape his relentless attitude to work and life.

For many years, the devotion the McLeans showed to their faith meant there was no place for extravagances, such as a television, in the family home. Shows of wealth were never something Jim approved of.

Having started out in the junior ranks with hometown team Larkhall Thistle, he moved on to stints with Hamilton, Clyde and Dundee before ending his career alongside younger brother Willie at Kilmarnock.

A total of 170 goals from 474 senior appearances was a fair return from an inside forward but it was in coaching that he made his biggest impact.

However, it was with Dundee and not United that he took his first steps towards management, having returned to Dens Park in 1970 as first-team coach under John Prentice.

When Prentice decided to emigrate to Canada, McLean believed he should have been promoted to manager. The Dark Blues board thought otherwise, hiring former Rangers boss Davie White instead.

It was a twist of fate the Tangerine faithful will be forever grateful for. Within weeks, McLean, aged just 34, had wandered across Tannadice Street to take over at United, setting the club on a path towards a golden era.

McLean later said: “Had they offered me the job as Dundee coach then the success in my career would have been achieved at Dens Park, not Tannadice.”

It took time for his methods to click, though, with the Terrors hovering in mid-table until the youth system which he had installed began to bear fruit. The League Cup was won in 1979 and retained a year later.

As the 1980s dawned, McLean’s side combined with Alex Ferguson’s Aberdeen to forge the ‘New Firm’ as Glasgow’s big two were left trailing.

With a side that reflected his tireless work ethic, McLean’s crowning glory came in 1983 when United claimed their one and only Scottish League title. A team that included the likes of Maurice Malpas, Richard Gough, Dave Narey, Ralph Milne and Paul Sturrock clinched the trophy with victory over city rivals Dundee at Dens on the final day of the season.

It was the springboard to Europe and McLean almost transferred domestic success to the continent as his team marched all the way to the semi-finals of the European Cup the following season.

Only a contentious defeat to Roma denied them the chance to go after the biggest prize of all, but McLean’s side continued to punch above their weight.

Barcelona were beaten home and away, while Monaco, Borussia Monchengladbach, PSV Eindhoven, Anderlecht and Werder Bremen were also seen off during the McLean era.

However, there was more disappointment in the final of the 1987 UEFA Cup as Gothenburg prevailed over two legs.

The other prize which eluded McLean was the Scottish Cup. Six times he led his side out at Hampden, but the club had to wait for Ivan Golac to take over in 1994 before they could finally land the trophy.

McLean’s last attempt in 1991 – by which time he had added the role of chairman to his Tannadice tasks – saw him frustrated by his brother Tommy, whose Motherwell side edged an all-time classic final 4-3 after extra-time.

But for all that he achieved with United, McLean’s irascible nature undoubtedly prevented him from forming closer bonds with his charges.

Many of the relationships he held with his players ended strained as frustrations grew over the lengthy contracts he famously dished out, usually on meagre terms.

He fell out with his captain Malpas just before the 1994 cup final, leaving the defender to lament: “I think I went from being loved to hated, back to loved and then hated again.”

But the players’ respect towards him as manager was unwavering.

“Jim McLean was always ahead of the game,” said Michael O’Neill, who moved to Tannadice from Newcastle in 1987. “However, you had to withstand the abuse at times.

“I was different from a lot of the young lads at United because I’d been signed. At the time it was a record fee they paid for me and it was almost as if Jim McLean held that against me.”

An unsavoury incident in 2002 when McLean attacked a BBC journalist ultimately brought an end to his association with the club as he was forced to resign his boardroom post.

But his place in United’s history will not be forgotten.

In addition to his Dundee United duties, he was part-time assistant manager to Jock Stein with the Scotland national team for four years, including at the 1982 World Cup.