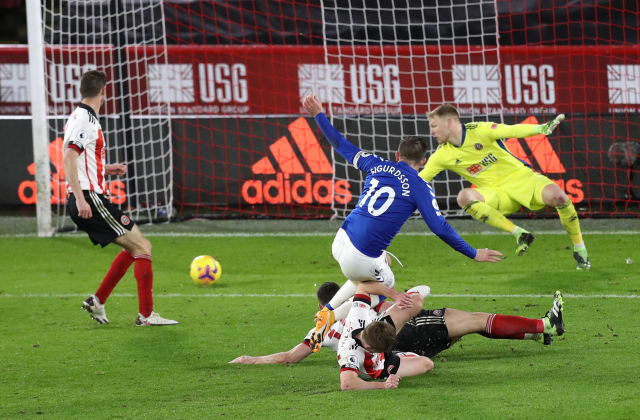 Sigurdsson scored 10 minutes from time to give Carlo Ancelotti’s team a fourth straight Premier League victory, moving them to within two points of Merseyside rivals and reigning champions Liverpool.

For the Blades, it was yet another defeat. Chris Wilder’s side have lost 13 of their 15 Premier League matches and are only the third club in top flight history to be without a win on Boxing Day, after Burnley in 1889-90 and Bolton in 1902-03.

The blustery conditions at Bramall Lane made things tough for both teams and there were few clear-cut chances in the game.

Alex Iwobi looked bright for the visitors during the first half. The midfielder was at the heart of much of what was good about Everton and worked Aaron Ramsdale with a shot from the edge of the area, although his effort was straight at the goalkeeper.

Everton threatened again shortly afterwards following a handling error from Ramsdale. The 22-year-old spilled Sigurdsson’s free-kick and had to be brave to block Ben Godfrey’s follow up, taking the ball in his midriff.

The Blades’ best chance of the first half saw David McGoldrick round goalkeeper Jordan Pickford before his shot was cleared from just in front of the goal line by Godfrey. However, television replays showed the former Republic of Ireland international would have been offside had he scored.

The hosts thought they should have had a penalty early in the second half when half-time substitute Oli McBurnie went down after tussling with Keane. There was definitely a slight push by the Everton defender but VAR decided that it was not enough to award a penalty.

Ramsdale beat away an effort from Sigurdsson with some assurance midway through the second half but then worried his defenders with a less convincing piece of handling to push away a Seamus Coleman cross.

Everton had been knocking on the door and made the breakthrough with 10 minutes remaining when Sigurdsson scored to give them the lead, beating Ramsdale with a low shot following some good build up play involving Abdoulaye Doucoure and Bernard.

It was the only real moment of quality in the match and it was a huge blow for the Blades, who once again had been firmly in the contest but faced the prospect of losing by a single goal margin for the 10th time in the Premier League this season.

Wilder’s side threw all they had at Everton in the closing stages but the visitors seemed confident backing themselves to see out the game with 10 men behind the ball.

McBurnie had a couple of chances in injury time but he was off balance each time as he headed over the crossbar and then dragged another effort wide.