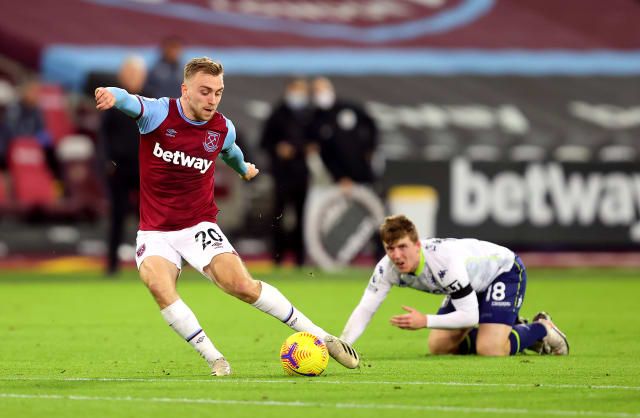 West Ham winger Jarrod Bowen has been challenged to add more goals to his game despite boss David Moyes being impressed with how he has adapted to life in the top flight.

The attacker has become a key figure at the London Stadium since he moved to the club from Hull last February.

A goal return of five in 27 appearances does not fully highlight the impact made by the 24-year-old, who has also registered six assists in that period.

During his time with the Tigers, who were relegated from the Sky Bet Championship after his mid-season departure, Bowen hit double figures in each of his last three seasons and West Ham’s manager believes a similar ratio is possible in the Premier League.

“I think if you look at his goals record for Hull, he was normally 13, 14 or 15 goals a season at Hull for a wide player,” Moyes said ahead of Sunday’s clash with Brighton.

“He plays a similar role for us here to what he did there, but we are looking for goals and assists from him. It’s a big part of his game which we rely on.

“I think he’s made the step up well, but I think there’s still more to come from him. He can still continue to make improvements in his game but he’s been consistent for us and we are pleased with him.

“Of course there will be different times when we have to take him out but, yes, we’d like more goals from him, but overall I think he is still making a big contribution to the team.”

While Bowen is contracted to West Ham until the summer of 2025, there are some key members of the squad who will be free agents in June.

Lukasz Fabianski and Fabian Balbuena only have six months left on their terms and it is the case for captain Mark Noble too.

Moyes believes coronavirus would have impacted transfer budgets for January and he also feels it may play a part in contract negotiations.

Despite this, the Scot insisted he was “doing all the correct things” to ensure the crucial members of his squad are not able to leave.

“I think Covid is playing a part for a lot of clubs,” Moyes said. “Obviously any contracts getting given out just now, I’d have thought if anything shut down, how would it work?

“I’m hoping I don’t ever have to use the R word (relegation) this year but you know until you get 40 points then you do sometimes and that also plays a part as well.

“But I think because the crowds aren’t there it makes it really difficult for the owners, not just for our club but any club.

“Let me tell you, I would hope that I was experienced enough to make sure that I was doing all the correct things, when it was needed, at the right times. All I can say is, yeah, we’re in a good position.”